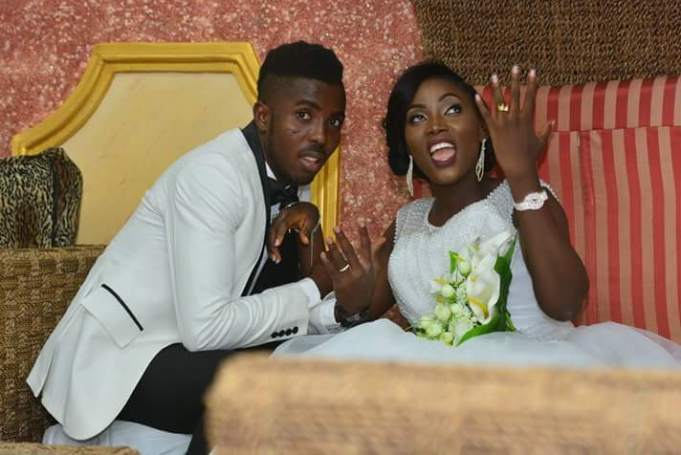 Super Eagles’ Striker, Chisom Elvis Chikatara has wedded his sweetheart, Janet Uchendu in Umuahia in a ceremony that attracted the high and low in the society.

The wedding ceremony, which took place at the Christian Foundation Evangelical Ministries Nigeria incorporated, Amuzukwu-Ibeku, was supervised by the General Overseer of the Church, Rev Inegbulam Ohaeri with Emma Odoemelam conducting.

In his homily, Pastor Christian Okezie advised the couple to make God the cornerstone of their marriage and to avoid a third party in their domestic affairs.

Pastor Okezie, who acknowledged that there is no perfect marriage, urged Chisom and Janet to devise a system that will suit them and follow it diligently while congratulating them for having the courage to make their expectations to become husband and wife a reality.

He said they should love, cherish and respect each other for the marriage to blossom and wished them well as they strive to build a new home.

At the prestigious “Wonderland and Events” where the couple entertained their guests, the chairman of the occasion, Chief Emeka Inyama reminded the couple that marriage was like a school where new things are learned every day and urged them to make the best use of the opportunity.

Chief Inyama, who is also the chairman, Abia Warriors Football Club of Umuahia, expressed happiness that Chikatara, who featured for his side for many years before he transferred to Wydad Casablanca of Morocco
last year, has moved on in his career and called on his wife to take good care of him, for him to excel.

In his response, Chikatara thanked all their guests for honouring them in a special way and pledged that they will do their best to ensure that their marriage works.