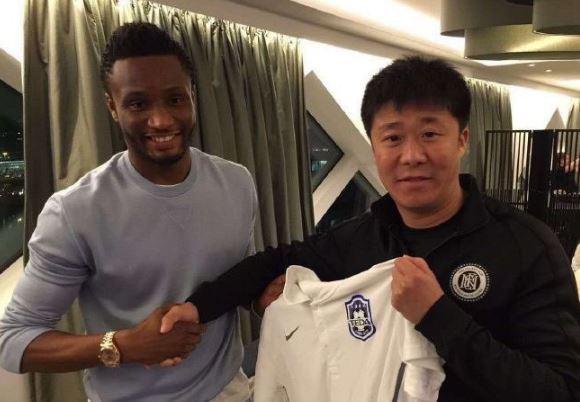 By Abiola Shodiya
Super Eagles’ Captain, John Obi Mikel has joined Chinese Super League side, Tianjin TEDA after being frozen out at Chelsea under Coach Antonio Conte.  Mikel has not played a single minute under the Italian this season and has now become the latest star to head to the Far East, where he will reportedly earn £140,000 a week.  The Nigeria international paid an emotional tribute to Chelsea in a farewell letter that confirmed his move this morning.  Mikel said in a statement: “As you will know, I haven’t featured as much this season as I would have liked, and at 29 I still have many years in the game ahead of me.
“With this in mind, I feel now is the time to seek a new challenge.  ”I’m delighted to be joining Tianjin TEDA FC in China, at a time that the Chinese Super League is really taking off, and I look forward to helping Tianjin TEDA FC continue to grow both on and off the pitch in the next few years.”  Mikel recalled how he joined Chelsea as a 19-year-old from Norwegian Premier League side Lyn Oslo in 2005, then going on to make 374 appearances, scoring 6 goals and winning 11 trophies in 10 years, including a UEFA Champions League trophy, the only in a London club.  “To play for Chelsea, to become part of the Chelsea family, to work with some of the best managers and players in the world, has truly been an honour.  “Every achievement I have been part of in my time at Chelsea holds a special memory: my first goal, against Macclesfield in 2007 (even though there were only five more after that!).
“The nail-biting end to the 2010 season – securing the title on the last day, scoring a record 103 goals in the process, and winning the FA Cup a week later.  “Didier’s extra time winner against Manchester United in the 2007 FA Cup Final. Beating two of our biggest London rivals (Arsenal in 2007 and Tottenham in 2015). Winning the Europa League in Amsterdam, with one of the last kicks of the game.  “Then there was Munich. We were desperate to make up for the disappointment of the 2008 final, but trailing with two minutes to go, against Bayern, in their own stadium, it seemed that once more luck was against us.  ”Up popped Didier, the rest is history, and to date we’re still proudly the only team in London with the European Cup.”