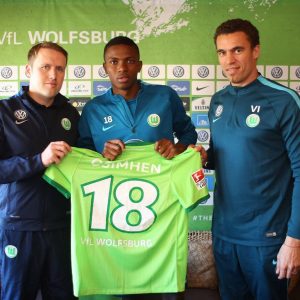 VFL Wolfsburg’s new signing, Victor Osimhen has been unveiled by the club, even as the Nigerian international is set to feature for the Germany-based club.

The rising star’s signature was sought after by a host of top clubs after his impressive showing at the 2015 FIFA U-17 World Cup in Chile before he finally agreed to settle with Wolfsburg.

“I am here to learn, I know there is a lot I need to know that will improve my approach to the game and make me a better player,” Osimhen started.

The prolific and nimble-footed Osimhen banged in ten goals at the FIFA U-17 World Cup in Chile, a feat which earned him rave reviews across the continent and beyond.

On the fight for a starting place in Wolfsburg, the gangling forward stated:

“I will have to wait for my time and I will take it when it comes. The competition will keep me on my toes and in no time it will yield, Osimhen told aoifootball.com exclusively.

Osimhen is currently with the Bundesliga side who are currently on a mid-season tour in the United States of America.