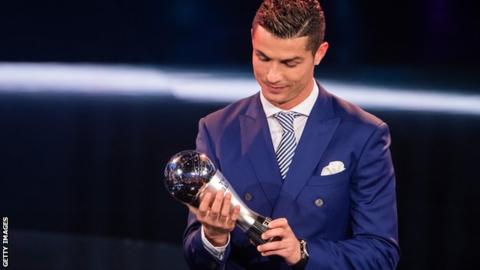 Cristiano Ronaldo has won the first ever edition of The Best FIFA Men’s Player Award. On a cold and snow-covered evening in the lakeside city of Zurich, the on-fire Portuguese took to the stage to accept the highest individual player award in world football, having beaten off fellow nominees Lionel Messi (Argentina) and Antoine Griezmann (France) in the vote.
FIFA.com spoke exclusively to Ronaldo backstage after his win to get his thoughts on the year just past. The Real Madrid star also looked ahead to the challengers lying in wait as we build towards the fast-approaching FIFA Confederations Cup 2017, where Portugal, led by their inspirational captain, will make their first appearance at the tournament.

Cristiano, congratulations. Even for someone who has enjoyed plenty of amazing years in football, is it fair to say that 2016 stood out from them all?

I have said it a few times: this has probably been the best year of my career. Having won the [UEFA EURO 2016] trophy with the national team obviously plays a big part in it as it was a first for Portugal and this makes 2016 a very special year. But there is also Real Madrid winning the Champions League and then the Club World Cup to finish the year in the best possible manner. It was a spectacular year; a truly special one. I have no doubt that it has been my best since I have started to play football.

As you amass team and individual awards year after year, do you have a picture of Cristiano Ronaldo’s place among the greatest footballers ever?

I have no doubt that I am already a part of football’s history. This has always been my major goal, since I started playing: not only to become a player, but to be a star and to constantly strive to be the best. And I did it: the trophies speak for themselves – both the titles, the individual awards, and the records. It is a source of great pride and it motivates me to keep on working the same way I have been doing so far.

You have won plenty of individual awards, but now we are talking about a brand new one: the very first The Best FIFA Men’s Player Award.

What’s the secret of keeping it up year after year?
There’s no secret. It’s working strong and arduously. I’m playing for a team that gives me the possibility to be able to compete for these trophies. In A Seleção also. I thought it was a sensational EURO. I’ll return to saying again, it was a year of dreams. The collective performance, the individual performance, the team performance and the performance of the national team.

You scored the decisive penalty in the Champions League final, and three goals in the Club World Cup final. But the EURO was different, as you had been off the field from an early stage. How did that experience feel?
It was complicated. I started the game but I didn’t finish. I was very nervous. I remember that I was in the dressing room. Then I went outside. I think my behaviour speaks for me really. I don’t really have anything to say. The images don’t lie. People can see how nervous how I was. But I think it was a glorious day for Portugal.

But you looked very comfortable?
I looked it but I wasn’t! [laughing]
You look quite natural on the touchline next to Santos. Does that mean that we’ll see Cristiano Ronaldo the coach in the future?
Very difficult… never say never. I don’t know what will happen in the future but in this moment I don’t see myself becoming a coach.

If you had to choose one moment from 2016, which one would that be? And why?
Winning the EURO. I think it was the pinnacle of my career. Not to diminish my praise for the other trophies, the Champions League and Club World Cup, but this was special for being the first title in the history of Portugal.

What are the main objectives for CR7 in 2017?
They’re the same ones. New challenges. Trophies to win. Goals to score. Trying to win the maximum possible with the collective performance and if possible the individual performance also.
This year you have the Confederations Cup. What does that mean for Portugal and for Cristiano?
It will be the first time Portugal competes for the Confederations Cup trophy and it’s going to be beautiful. It’s going to stay on our resume. Obviously, it’s a dream to win. We know it’s going to be hard. There are going to be great teams. But in football, everything is possible.