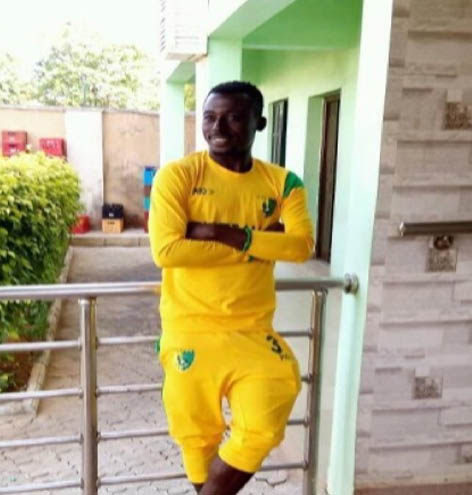 Throw-in is a way of restarting a game in football when the ball goes beyond the sidelines, off the field of play. Few players in the world have actually taken advantage of long throws to create scoring chances for their teams, and notable among them is the famous Rory Delap of Stoke City FC in the English Premiership and his exceptional long throws that created several scoring chances for the EPL side.

One of such players in the Nigeria Professional Football League is Plateau United FC of Jos’ left back, Daniel Itodo, and he has expressed his desire to create more assists for his club in the upcoming 2016/2017 NPFL season.

Itodo, who made the highest number of assists for the Tin City side in the 2015/2016 league season through his long throws, is also arguably the player with the longest throw in the NPFL currently.

“My ambition is to provide more assists for my team in the new season” he said.

“I will be more fulfilled if I can surpass my achievements of last season” he added.

It would be recalled that the former DSS FC of Kaduna defender was responsible for ten assists for his team last season via his dangerous long throws. The likes of Rivers FC, Rangers Int’l, Wikki Tourists, Niger Tornadoes, Shooting Stars and FC Ikorodu United were some of the teams that fell prey to this rare talent of the Benue State-born teenager.

With an average throw-in that goes as far as forty five to fifty yards in a match situation, the utility player maintains that he effortlessly provides at least ten of such long throws per match, thereby creating numerous scoring chances for his attackers.

He sees this skill as a special gift which he has been working on after being discovered in Kaduna State while playing as a grassroots footballer.

“As a defender, my primary assignment is to prevent my team from conceding goals, but I know my ability to take long throws is a special talent” he stated.

“It was first discovered when I was playing for Celtic FC, a grass root team in Kaduna State. Since then I started working on it with special training, and now I can make countless number of long throws in any game.”

Daniel Itodo is one of several players Coach Kennedy Boboye will be banking on to spring surprises when the new NPFL season begins on the 15th January, 2017.