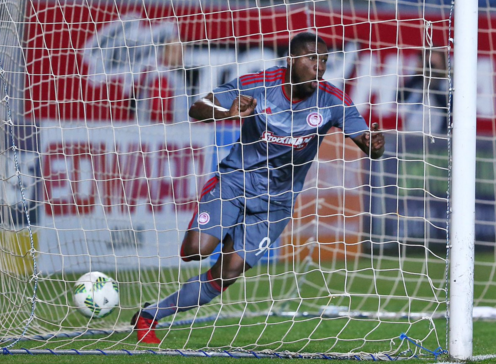 Super Eagles’ striker, Brown Ideye bagged a brace as Greek League leaders, Olympiakos could only leave Platanias with a draw.

The Nigerian international was on target twice in the opening 13th minute to give Olympiakos a 2-0 lead but the home side got level before half-time, courtesy of two goals from Greece internationals, Giorgos Giakoumakis and Giorgos Manousos.

The brace moved Ideye to 12 goals in 15 league starts for Olympiakos this season, three ahead of Xanthi’s Younes Hamza who has scored nine this season.

The draw means Olympiakos remain in first place with 38 points, 13 points ahead of second-placed Panionios who are yet to play their 15th league game of the season. Platanias on the other hand have leap-frogged Atromitos Athens, who are equally yet to play, into the seventh place.

Olopade: NNL is the most important league in Nigeria