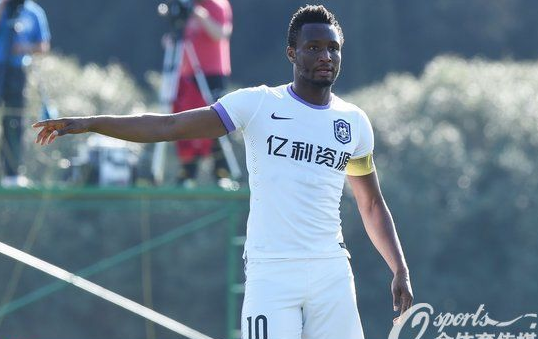 Super Eagles’ captain Mikel John Obi was on the score sheet for his new club Tianjin TEDA FC in a friendly game against Bundesliga II side, St. Pauli FC.

The Nigerian international scored in the 36th minute but his team lost 6-2 to the German side.

Mikel made his debut for the team few days ago in their first pre season loss to Borrussia Monchengladbach,and was also in action in the test game against St. Pauli.

The German side scored three goals in the opening 26 minutes, before the Nigerian pulled a goal back for his side in the 36th minute to bring scores to 3-1.

The former Chelsea defensive midfielder’s goal was a header from a well delivered free kick, which left the goalkeeper of St. Pauli stranded in goal as the ball sailed into the back of the net.
Mikel has not taken time to settle in to Coach Jaime Pacheco’s side as he has put in classy performances since joining the Tianjin Tigers.

NPFL: Not yet Uhuru for Rangers,  says Clement