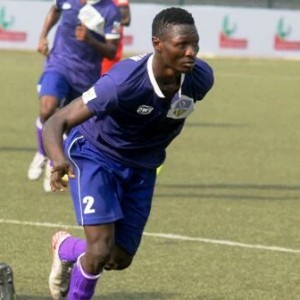 Mountain of Fire and Miracles Ministries Football Club left winger, Sikiru Olatunbosun has stated that his team will not taste defeat in Nnewi this Wednesday against FC Ifeanyiubah.

The Olukoya Boys who began their campaign in the 2016/17 Nigeria Professional Football League (NPFL) season on Sundaywith an overwhelming 3-0 victory over Niger Tornadoes at the Soccer Temple, Agege Stadium will be guests to the Anambra Warriors this midweek on Matchday 2 clash at the FC Ifeanyiubah International Stadium.

Olatunbosun who was one of MFM FC’s top performers last term in the apex league with 7 goals has kick-started the new NPFL season scoring one of the goals and creating two assists in his team’s triumphant outing over visiting Tornadoes began by expressing his profound gratitude in an interview with MFM FC media team on Sunday after the 3-0 win to the coaching crew led by Fidelis Ilechukwu and  teammates.

He said “I’m very excited getting a goal and making two assists because last season in our first match I scored the second goal and today I scored the first goal I’m very happy because it’s not easy to win the first game in the Nigerian League. To all my teammates I say a very big thank you.”

On the midweek game, Sikiru insisted ” We are going to Ifeanyi Ubah to fight for the three points. The worst we can get in the match is to draw but I’m very confident we will not loose in Nnewi although it’s not going to that easy,” concluded the Lagos born skillful striker to mountaintopfc.com.
Coach Fidelis Ilechukwu and his youthful team are topping the NPFL table with three points and a goal difference over Abubakar Bukola Saraki Football Club (ABS FC) who are second on the log.