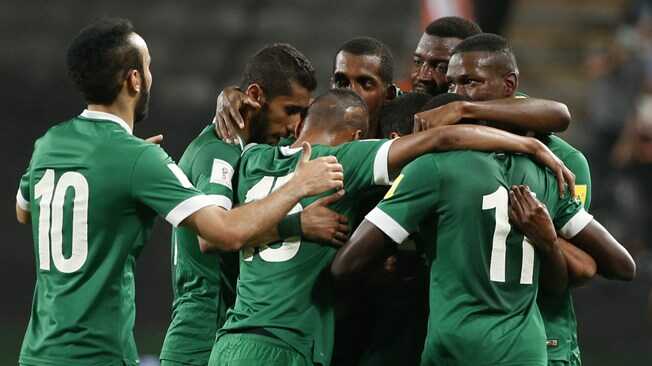 Thanks to a string of excellent results, Saudi Arabia are continuing to climb their way up the FIFA/Coca-Cola World Ranking. Bert van Marwijk’s charges lie top of Group B in the third round of the Asian qualifying competition for the 2018 FIFA World Cup Russia™ and have high hopes of qualifying for their fifth world finals, having missed South Africa 2010 and Brazil 2014.

The Saudis’ fast start in the race for places at Russia 2018 has been a major factor in their recent world rankings rise. After going unbeaten in their second-round group, the Green Falcons were on course to finish 2016 undefeated, only for Japan to get the better of them in Saitama on Matchday 5 of the third round.

Despite that reverse, the Dutch coach remains upbeat about his side’s qualification prospects. “It shouldn’t have any impact on us, especially as we’re still top of the group,” said Van Marwijk. “We’re going to make up for it against Thailand in our next match.”

The coach, who was in charge of the Netherlands at South Africa 2010, should not underestimate the Thais, however, especially after their battling draw with Australia in their final qualifying match of 2016.

The Green Falcons have been preparing for their next assignment with a training get-together in Abu Dhabi, during which they played out a goalless draw with Slovenia on 10 January, a result that saw the three-time Asian champions move up to 48th in the Ranking, their highest position since 2008.

Giving his views on the game at the final whistle, Saudi defender Omar Hawsawi said: “Friendlies are always very important because they give you a chance to weigh up your preparations and consolidate positive points. This was a very important match for us.”

New faces
Saudi Arabia are intent on booking their place at Russia 2018 and it is with that goal in mind that Van Marwijk has called up a clutch of new players, among them Al Nassr duo Sami Al-Najei and Abdurahman Al-Dosari and Al Ittifaq player Hasan Kadesh.

The next few qualifying matches will give the new arrivals the chance to show that they belong on the international stage, as Nawaf Al-Abed, Saudi Arabia’s leading scorer in the third round, explained. “These players deserve to get their chance,” he said. “Their skills have got them this far and I’m going to help them show what they can do.”

Four days after taking on Slovenia, the Saudis continued their preparations with an emphatic 7-2 defeat of Cambodia in Abu Dhabi. With expectations of a long-awaited World Cup place rising among their fans, the Green Falcons are now focusing all their energies on that upcoming trip to Thailand in March.

Success in that game and their subsequent qualifying engagements will, of course, keep them on course for Russia and see them soar even higher in the FIFA/Coca-Cola World Ranking.

FC Taraba will be ready for National League kickoff – Gani