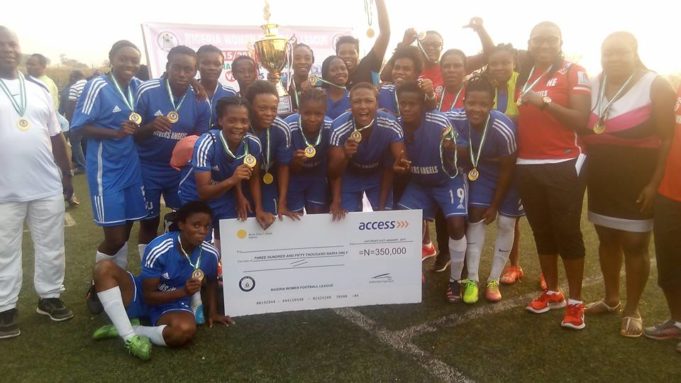 Rivers Angels of Port Harcourt on Saturday emerged champions of the 2015/2016 Nigeria Women Football League (NWFL) for the third consecutive season after beating Nasarawa Amazons 5-3 on penalties.
The match played inside the FIFA Goal Project ended in a stalemate after regulation time as both sides showed levels of brilliance but none of them could break the deadlock.
It was straight to a penalty shoot-out after the draw as Angels skipper and goalkeeper Charity John turned out to be the hero of the day.
John saved Nasarawa Amazon’s third kick taken by Ejalonibe Adejoke to ensure the NWFL defending champions had a lifeline.
Uju Joseph’s calm effort in the last spot kick for the Ultimate Club ensured Rivers Angels won their third consecutive league trophy, bringing it to five, the number of NWFL titles won by the team
The win ensured Rivers Angels crowned their season with a double as they had also grabbed the Federation Cup in November 2016 in similar way.
After the win, head coach Edwin Okon said he was a happy man
“Coming back from a break to have a three to four days training, I think am the happiest man.
“I expected them to do what they did today, I wasn’t expecting so much from the team and I thank God for the victory,” Said Okon.
Having lost to Rivers Angels for a second time this season, Head coach of Nasarawa Amazons, Christopher Danjuma still believes his side was the better side on the day.
“My girls were excellent and their performance was very good despite the final result,” he said
“The first one we lost during the course of the game while we lost this one on penalties so it doesn’t matter because I know we are better”. Danjuma added.