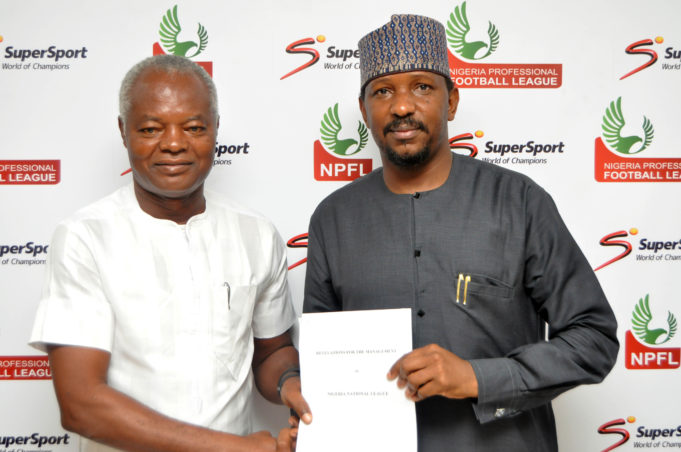 In a bid to tap from the fountain of knowledge of the headship of the League Management Company, following successes recorded as organiser of the Nigeria Professional Football League since the inception of the company, the newly-inaugurated board of the Nigeria National League led by its chairman, Chidi Ofo Okenwa, paid a courtesy call on the leadership of the LMC at its corporate office Tuesday in Abuja.

In his opening remark, Okenwa thanked the LMC for its support for the development of the second tier league, while pointing out that without the body the NNL 2015/16 league season would not have come to a successful end.

“We want to thank the League Management Company for its support without which the league won’t have come to an end successfully last season. We are here at the LMC to see the Chairman Mallam Shehu Dikko and the Chief Operating Officer, Mallam Salihu Abubakar and tap from their fountain of the knowledge. The success of the LMC can’t be over-emphasised and as we are set to sail, we certainly need to be guided,” said Okenwa.

Speaking further, Okenwa also appealed to the LMC for the adoption of its governing structure, rules and regulations and marketing ideologies.

Responding, chairman of the League Management Company, Dikko, welcomed the members of the NNL leadership, while charging them to be ready to sacrifice to build a transparent and formidable league.

Dikko gave a brief history of how the LMC was developed and how it has reached the current state by working together with stakeholders, especially the participating clubs and enjoined the new board to emulate the same process and always carry the stakeholders along.

“You all in the new NNL should see this appointment as a privilege to serve and to be part of history. I believe with our commitment, team work, dedication and hard work, in no time, the National League will be competing with the NPFL in terms of successes recorded,” Dikko remarked.

The chairman further explained the process of the drafting and the structure of the LMC’s governing structure which was done since 2013, and has now become a document of pride, with the smooth operations of the LMC and the recognition it has enjoyed by the Confederation of African Football (CAF) and the world football governing body, FIFA.

This has made CAF to appoint its Chief Operating Officer, Abubakar as a member of CAF Club Licensing instructors for the next two years.

Dikko handed over to the NNL Chairman Chidi Ofo Okenwa, documents for the governing structure as well as the framework and rules of the NPFL for its further input and enlighten the participating clubs to ensure the league is properly positioned to deliver on its mandate.