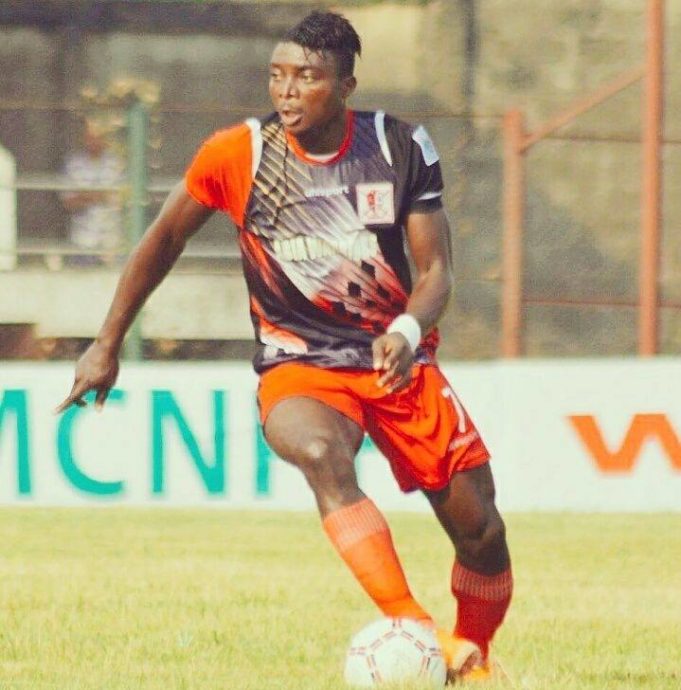 Following his blistering start to the Nigeria Professional Football League 2016/2017 season, Abia Warriors’ forward, Godwin Zaki has said he hopes to bang in thirty goals and end the season as the highest goals scorer.

Zaki, who has already scored twice in games against defending Champions Rangers International in the league opener in Enugu and away at Katsina United on Match Day 2, is optimistic he can shatter the league highest goals scorer record currently held by Enyimba FC’s Mfon Udoh who raked in 23 goals in the 2013/2014 league season.

“I’m glad I have started the league with goals; I hope more of it will come as I have an eye on the big gong, yes I mean the highest goals scorer award. My desire is to score 30 times this season. I am sure it’s going to be a tough task, but I’m poised and determined to do it”, said the former Delta Force FC striker.

The Benue-born power playing and bullish forward began his playing career in 2009 when he featured for Lobi Stars feeder team before going for trials in Norway at Lillestrom FC. He returned back to feature for Sunshine Stars and then again got a deal in Finland and later travelled to Cyprus before, returning back to the country to feature for Delta Force, a 3rd tier league side.

Godwin Zaki was signed up by Coach Felix Emordi after impressing in a pre-season friendly between Abia Warriors and Delta Force.

On the current state of the NPFL and the changes he has noticed, Zaki believed that there’s been lots of improvements in the top League, saying the gap between the Nigerian League and European leagues have been hugely being closed up unlike in the past.

“We are almost there. The level of development in our league has risen and in no time will be compared with other leagues I’ve featured in. All we need to do is to tighten the remaining loose ends. Getting there is sure” said the former Sunshine Stars striker.

On Abia Warriors’ chances in the league, the former Lobi Stars forward is confident that with the kind of quality players Coach Emordi and his team have assembled, the Umuahia-based outfit is sure to shine.

“With the quality of coaching crew and the players signed up at Abia Warriors, we certainly will shine this season. We shall continue to take the league one game at a time, and hope for the best of luck in our matches” concluded Zaki.