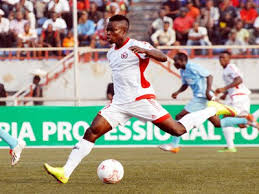 By Abiola Shodiya
Enugu Rangers International FC attacker, Daniel Etor has debunked reports that he was slapped by a fan after the NPFL match day 5 game at the Nnamdi Azikwe Stadium on Sunday.
Champions Rangers were forced to a 1-1 home draw by Niger Tornadoes and it was reported that Daniel Etor was slapped twice by an angry fan after the game, haven being fingered for poor performance.
Speaking exclusively to aoifootball.com, Daniel Etor rejected the notion that he was slapped twice by the fan.
“I’m surprised by the media reports because it didn’t happen. It was just a small issue he did not slap me, he just harassed me that’s it.”
He confirmed the management of Enugu Rangers have since taken actions on the issue.
“The management of Rangers have taken care of the issue. They arrested the guy and asked him to apologise which he has done”.
The fan, identified as “Baba Agu”, was warned sternly and made to commit to such incident never repeating itself again.
Daniel Etor is one of Enugu Rangers’ new signing, as the club looks to have a stellar season this year, defending their NPFL crown as well as representing Nigeria in the CAF Champions League.

Our target is to avoid relegation -Remo Stars