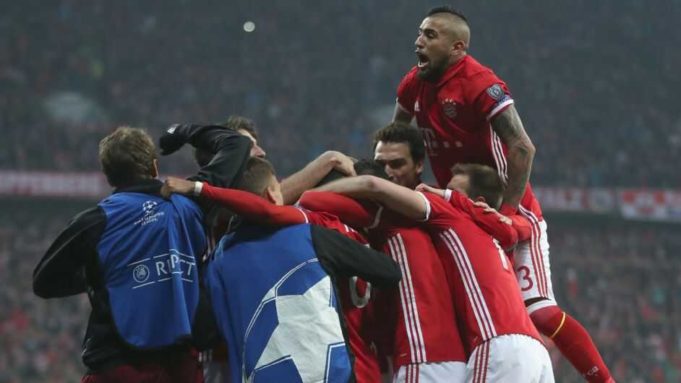 Arsenal will have to produce something special to reach a first Champions League quarterfinal since 2010 after suffering a 5-1 defeat to a rampant Bayern Munich side in the first leg of their round-of-16 tie at the Allianz Arena.

Despite Alexis Sanchez drawing Arsenal level on the half-hour mark following Arjen Robben’s early opener, Bayern outclassed the visitors after the break with Robert Lewandowski, Thiago Alcantara — twice — and Thomas Muller scoring to give their side a hefty advantage to take with them to the Emirates Stadium for the second leg.

It was Bayern who started on top and created the first chance of the game after eight minutes with Artutro Vidal firing a low strike at goal from the edge of the area, but David Ospina was able to get across to make the save.

The hosts did manage to break the deadlock just three minutes later as Robben cut inside from the right, after being given plenty of space by Arsenal’s defence, before curling a fine strike past Ospina into the top corner.

Bayern, dominating at this point, continued to come at the visitors with Arsenal struggling to keep hold of ball after regaining possession, while Robben again cut in from the right before seeing a strike saved.

But Arsenal soon stepped up a gear and had a Mesut Ozil free kick saved by Manuel Neuer in the 28th minute, before Laurent Koscielny won a penalty after being fouled by Lewandowski two minutes later.

Sanchez stepped up to take the spot kick only to see his effort turned away by Neuer, and he subsequently miskicked the rebound before finding the back of the net on the third attempt, cleverly hitting the ball on the spin to find the bottom corner.

Bayern could have regained the lead in the 35th minute when Lewandowski headed a Vidal cutback over the bar from close range, while Arsenal could have had a second themselves a few minutes later, only for an unmarked Granit Xhaka to send his effort from the edge of the area straight at Neuer.

Chances towards the end of the first period continued to be created with Lewandowski and Mats Hummels both missing the target with headers, while Ozil found himself clear in on goal with just seconds of the half remaining, yet he was unable to find a way past Neuer.

Eight minutes into the second half, and Bayern had restored their lead with Lewandowski this time finding the back of the net with a header after rising highest in the box to guide Philipp Lahm’s cross into the far corner.

Thiago then made it three for Bayern three minutes later, rounding off a well-worked move after running onto Lewandowski’s flick before slotting past Ospina.

The hosts, by now full of confidence once more, continued to pile on the pressure, with Lewandowski being denied by the bar, Robben having a shot blocked off the line and Javi Martinez seeing a point-blank header turned over in quick succession.

Arsenal were eventually breached for a fourth time on 64 minutes when Thiago’s effort from the edge of the box deflected off Xhaka, sending the ball spinning past a helpless Ospina.

Bayern played the remainder of the game in Arsenal’s half, with Vidal, Robben and Costa all going close, and they were eventually rewarded when substitute Muller found the back of the net in the dying minutes.

LaLiga: Injury rules Omeruo out of Leganes clash away at Alaves

Nwakaeme gets first call-up against Cameroon