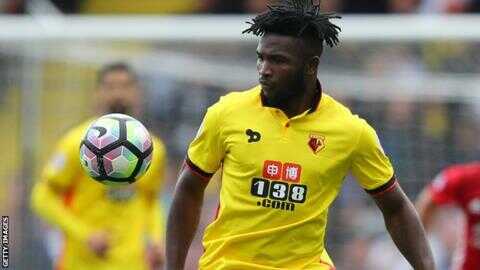 Coach Manu Garba has revealed how he turned down a $10,000 bribe from Al-Alhy chief seeking to lure away Isaac Success at the CAF U17 Nations Cup in Morocco in 2013.

Isaac Success had lit up the tournament, scoring four goals in the first match against Ghana which instantly made him the cynosure of all eyes,including football scouts.

Manu, as the then coach of the Golden Eaglets,was approached with a tantalizing amount of $10,000 by Al Ahly chief who wanted to meet with Isaac Success after he watched him rundown Ghana and instantly wanted to lure the Nigerian super starlet.

Manu revealed that the Al Alhy chief who couldn’t speak fluent English but came with a Ghanaian interpreter who understood Arabic, requested to allow him the opportunity of speaking with Success for 10 minutes and he would give him 10,000 USD.

But as the coach of the Nigerian U-17 national team, Manu Garba would not entertain any distraction to his team, and, politely told the Egyptian chief he can’t allow him meet with the youngster.

Manu narrated how he informed Issac Success about the attention his performance had sparked but advised the young man to remain focused and keep his cool, adding, that only that, will get him to play football at the highest level.

Success was later snapped up by Granada in the Spanish La Liga and today plays for Watford in the English Premier League.

Call me a ‘Rich Monkey’, Emenike replies racists in Turkey

Abiola Shodiya - May 15, 2017
ALL CATEGORIES
SOUNDCLOUD