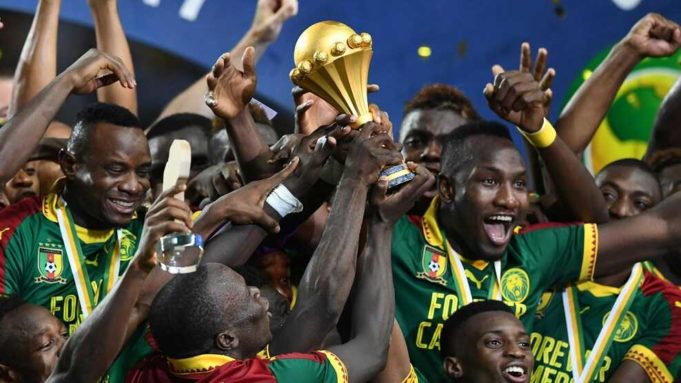 When Cameroon coach Hugo Broos prepared his side for the CAF Africa Cup of Nations final against Egypt in early February, the Belgian made a point of not only telling his player about the formidable opponents they would be facing in the Stade De L’Amitie D’Angondje in the Gabonese capital Libreville.

“I wanted to motivate them a little bit more, so I reminded them that as African champions they would be travelling to Russia in June this year to participate in the FIFA Confederations Cup,” Broos said. “I told them that if they won the game against Egypt they would make the journey to Russia. Without a doubt, that was extra motivation for all of them.”

At the end of the first half though, Broos’ dream of a trip to Russia for the Confederations Cup seemed distant after Mohamed Elneny had given the Pharaohs the lead. “Egypt was playing better than we were,” continued Broos. “We did not play our game in the first half. I think we were afraid or nervous. But I told the players at half-time that it was not finished, and that they could still win and qualify for the Confederations Cup.”

Nicolas Nkoulou equalised on the hour and with two minutes to go, Vincent Aboubakar gave the Indomitable Lions their fifth African crown. “At the end, I think we were the team that really deserved the title. And now we are looking forward to playing at the Confederations Cup. We are all very happy about that,” Broos said.

Michael Ngadeu was one of several players in the Cameroon squad for whom Gabon 2017 was their first appearance at a major competition. The Slavia Prague defender, who was an ever-present in Broos’ starting XI, is now looking forward to playing at Russia 2017.

“We have a very good squad,” said Ngadeu. “We are a young team and it could well be that this team will be even better in three, four years. It will be the first appearance at the Confederations Cup for all of us, and we will put in all effort to make sure that we play a good tournament.”

Russia return in peril
Trailing Nigeria by four points with four games remaining in Africa’s 2018 FIFA World Cup Russia™ qualifiers, Cameroon face a major challenge to overhaul the Super Eagles. A return visit to Russia in 2018 may prove to be a step too far.

Lorient striker Benjamin Moukandjo is one of the few players in the Gabon squad who has experience of playing on the global stage, having started in all three group matches for Cameroon at the 2014 World Cup in Brazil.

“The Confederations Cup is another big competition,” said Moukandjo. “We had a few weeks enjoying the triumph at the Africa Cup of Nations, but now the work for the Confederations Cup will start. There will be a few call ups to start preparing for the big matches that are coming up. I am really looking forward to playing in Russia.”

The west Africans have been drawn into Group B with Chile, Australia and world champions Germany, which will allow Ambroise Oyongo to take on some of the best players in the world. “When you play football you have to be ready to play against all the best players,” said Oyongo. “You have to prepare for that, you have to focus. I am looking forward to testing myself. It is not easy. I might be facing Thomas Muller.

“If we qualify for the semi-finals, we can play against Portugal and Cristiano Ronaldo. If you play at that level, you have to accept playing the best. You have to fight to be the best defender in the world.”

Oyongo, who plays for Montreal Impact in the MLS, said that Cameroon would learn from their experience in Gabon. “The best teams from all around the world play in the Confederations Cup, so we have to prepare well. We have a good team and if we prepare as we did for AFCON, we will be great and we can do something there.”

Before Gabon, Broos had to replace several regulars, but Oyongo is not concerned that a potential loss of harmony within the squad. “We are strong because of our mentality,” he said. “If everyone accepts what the coach says, we can do anything. We need to be together and we need to be focused. We don’t have big players in the team, but we have the mentality.”