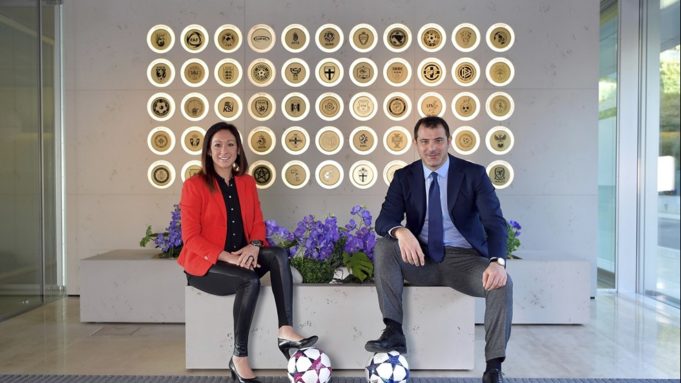 Nadine Kessler and Dejan Stanković are both embarking on new steps in their careers, with the pair joining UEFA to oversee the development of football within Europe.

Nadine Kessler and Dejan Stanković have earned glowing reputations as two of Europe’s top footballers over the last decade. However, after deciding to hang up their boots, they are both embarking on new careers at UEFA’s headquarters in Nyon.

Kessler has joined UEFA’s team as a women’s football advisor, which will give her the opportunity to pass on her knowledge for the good of the women’s game. Her main roles will include helping to oversee the development of women’s football, as well as having an input in the growth of women’s competitions.

“The women’s game is developing at a fast pace, and opportunities are opening now that we could not have dreamed about when I was just starting my career,” Kessler said. “I want to do everything I can to try and take our top competitions like the UEFA Women’s EURO and the UEFA Women’s Champions League to even greater heights, while also helping to further develop the women’s game in all corners of Europe.”

The German-born midfielder – who retired through injury in 2016 – has been one of the stand-out female players since making her debut in 2005. She helped Germany win the UEFA Women’s EURO in 2013, and was a three-time UEFA Women’s Champions League winner. Her greatest individual triumph came in 2014, when she was named FIFA Women’s World Player of the Year and UEFA Best Women’s Player in Europe.

UEFA President Aleksander Čeferin has been vocal in his backing for women’s football. It was a key part of his pre-election manifesto, and now he has introduced a women’s football unit at UEFA.

“I feel there is huge potential for us to develop and improve this side of the game,” he said. “I am also looking at ways of how we can improve the UEFA Women’s Champions League, to give it even more attention than it gets today.”

Stanković, one of Serbia’s most decorated footballers and a UEFA Champions League winner with FC Internazionale Milano in 2010, has also moved to Nyon to take up a role as a football development advisor. He will work on UEFA projects assisting UEFA national associations to develop their best talents at the age of 14/15, as well as ensuring that top-class football education provided in the very early stage of their growth enhances the technical level of the future professional footballers.

“I have played football for 20 years, and now it is time to open a new chapter in my life,” he said. “It is an honour for me to work for UEFA, and to be given the chance to give something back to football.”

Stanković believes that it is part of his natural football progression to leave the pitch to take up a new role, which he hopes will lead to fresh generations of children becoming players.

“I have been part of a team all my life, and now I will be part of an even bigger team comprising UEFA’s 55 national associations, to help them with the development of academy football and young players.”

NPFL MD 26: ABS vs Pillars- An away victory will return us back to...