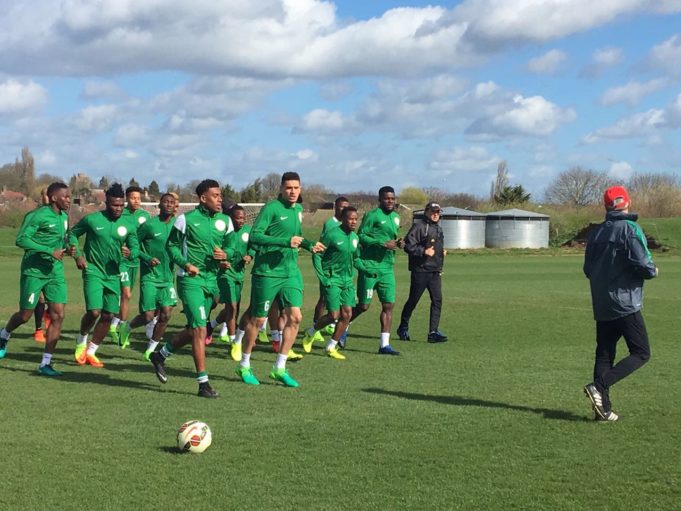 The Super Eagles’ Hotel Crowne Plaza Ealing in London has been very much alive since Monday following the arrival of 17 of the 25 players invited for two top –drawer friendlies on Thursday and next Monday.

Before dinner time on Monday, the list had swelled to 17 with the arrivals of Leon Balogun, William Ekong, Tyronne Ebuehi, John Ogu, Kelechi Iheanacho, Kenneth Omeruo and Victor Moses.

However, English Premiership giants Chelsea FC’s big force, Victor Moses has been excused from the camp after showing a report from the Blues’ medical team that stated he was being treated for injury. Eagles’ medical doctor Ibrahim Gyaran promptly told the technical crew to allow Moses to go back and continue treatment in south –west London.

Nigeria –based Ikechukwu Ezenwa, Oghenekaro Etebo (Portugal) and Musa Muhammed (Bosnia Herzegovina) are expected on Wednesday (all delayed as a result of visa), while goalkeeper Daniel Akpeyi (South Africa) can only arrive on Thursday as a public holiday in South Africa meant he could not collect his visa earlier. Kingsley Madu (Belgium) and Uche Agbo (Spain) are also delayed by visa.

With injury to Victor Moses, only 24 players will now prosecute both matches.

Three –time African champions Nigeria take on 2002 FIFA World Cup quarter finalists Senegal at The Hive, home ground of Barnet Football Club on Thursday, 23rd March by 8pm, and will be up against 2013 Africa Cup of Nations Final victims Burkina Faso at the same venue and time on Monday, 27th March.

The Nigeria Football Federation and its FIFA Match Agent, Jairo Pachon of Eurodata Sport arranged both matches as preparation for the Super Eagles for the 2019 Africa Cup of Nations qualifying series starting in June, as well as the remaining matches of the 2018 FIFA World Cup qualifying race.

Nigeria perch with relative comfort at the top of Group B of the African race for Russia 2018, with the maximum six points from two matches, while next opponents Cameroon, who visit Nigeria late August and then host the Eagles six days later, are in second place but four points adrift. Algeria and Zambia are the other teams in the group.