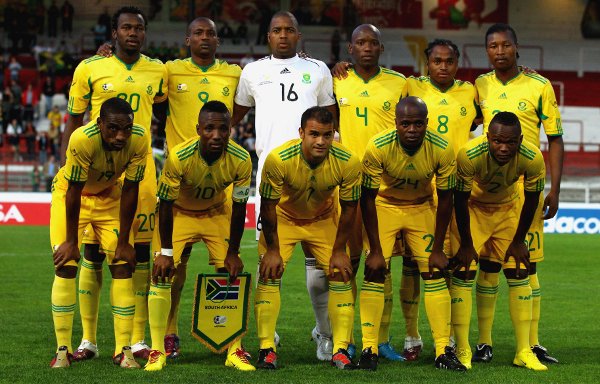 It was a frustrating evening for a much-changed Nigeria’s Super Eagles first opponent in Africa Cup of Nations 2019 qualifiers, the Bafana Bafana of South Africa after they had to settle for a 0-0 draw against Angola in a friendly international on Tuesday night.

Bafana’s Caretaker coach Owen Da Gama named an almost entirely different team to the one which beat Guinea-Bissau 3-1 in Durban on Saturday, with nine changes to his starting XI at a sold-out Buffalo city stadium.

Included among the newcomers were promising national Under-20 striking duo Luther Singh and Phakamani Mahlambi, both of whom were handed debuts for the senior side, but failed to make much of an impact on the night.

The South Africans made a bright start to proceedings, their energy and clever interplay providing exciting viewing for the charged-up crowd. But some determined defending by the Angolans coupled with some poor decision-making by the hosts in the final third of the field meant there were virtually no chances on goal for Bafana.

And while Andile Jali and Tiyani Mabunda excelled in the middle of the park in by winning a constant supply of ball, up front Percy Tau lacked conviction after getting into good positions on several occasions. The Sundowns man was guilty of wasting South Africa’s only real scoring opportunity when he tried to square the ball from 10-yards out rather than shooting at goal in the seventh minute.

It was South Africa’s goalkeeper, Darren Keet, who had to make the first noteworthy save of the game, the Bidvest Wits man doing extremely well to keep out a stinging drive from Caifalo Herenilson six minutes before half-time.

With Bafana again failing to turn promising play into chances after the restart, the visiting side were almost in front on 55 minutes when Augusto Manguxi’s thunderous strike from 25-yards out skimmed the top of the crossbar.

There was finally a save for Angolan keeper Adilson Neblu to make when he dived across to his left to keep out a well-struck shot from range by substitute Keagan Dolly, just before the hour mark.

It took until the 82nd minute for the home team’s next strike on goal, but from 30-yards out Kermit Erasmus’ effort rose over the bar.

Bafana kept on pushing for a goal right up until the end of the game but just weren’t able to find a way through the committed Palancas Negras rearguard.

The draw at least saw South Africa extending their unbeaten run to a record 17 matches on a night in which was more about looking at some alternative and possible future options in the Bafana setup.

The match is expected to be the last one in charge for Da Gama as the South African Football Association are expected to soon announce the new head coach as preparations for the 2018 World Cup and 2019 AFCON qualifiers get underway in earnest.

The Super Eagles hosts South Africa in June in the first game of AFCON 2019 qualifiers.