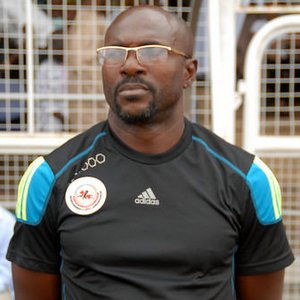 Following his side’s unimpressive 2-2 draw against Zambia’s Zesco United in the CAF Confederations Cup play-offs on Sunday at the Nnamdi Azikiwe Stadium, embattled coach of Rangers International, Imama Amapakabo has said he is yet to be informed about any decision taken by the club’s management.

Amapakabo was given a final ultimatum just before the game by the management of the Flying Antelopes, even as unconfirmed reports available to AOIFootball.com reveals he has been told to step aside for the moment.

“I’m yet to get any correspondence from the management as to what decision they’ve taken. So, I can’t confirm anything at the moment,” Imama stated.

On why his team failed to hold on to their lead and capitulated just at the tail end of the game, the Okrika-born soccer tactician maintained that they failed to clear their lines and were punished.

“We had the lead and the entire game was under our control. But we were punished when we failed to handle aerial and dead ball situations. We had a great game but it’s unfortunate it ended the way it did,” said Imama.

Rangers play the return leg next week Thursday in Zambia and Amapakabo believes it’s not over yet and they can turn things around and qualify for the group stage of the CAF Confederation Cup but that depends on if he still remains in charge of the team.

Meanwhile latest reports from Enugu reveals that Rangers management are locked in a meeting as of the time of this report and will come out with a decision on the fate of the Rivers born coach later today.