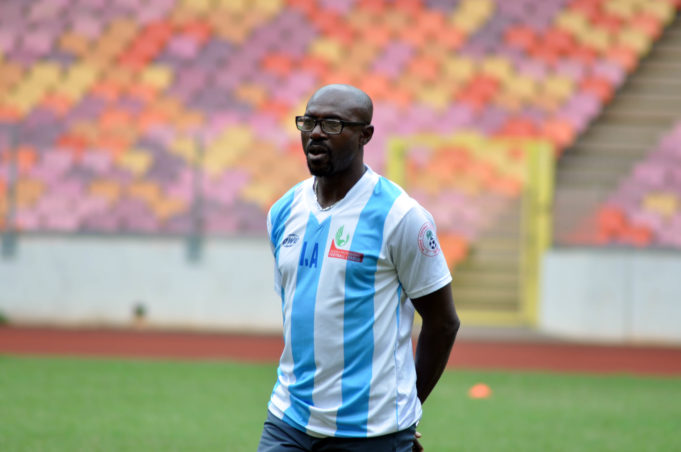 AOIFootball.com has gathered that Enugu State Government has queried the General Manager of Rangers Int’l FC, Christian Chukwu, over his complicity on the alleged sack of the club’s Technical Adviser, Imama Amapakabo.
The Commissioner for Sports, Charles Ndukwe disclosed this in Enugu on Wednesday while briefing newsmen on the current issues facing the Flying Antelopes.

According to Ndukwe, the Technical Adviser of Rangers, Imama Amapakabo is not sacked and has not been replaced.
He said that the management of Rangers Int’l FC had not engaged any coach, contrary to news making the round that former player of the team, Sylvanus Okpala had replaced Amapakabo.

“The truth is that after the match we played against ZESCO United of Zambia on Sunday, we noticed that a lot of fans were going after Coach Imama Amapakabo.”

“I do not know how that happened, but I know that security men were there and they took care of the situation.”

“On our own, the best thing we could do was to ask him to step aside on suspension. But I was surprised in the morning to hear over the radio and television that the coach was sacked. So, I immediately issued a query to the GM, Christian Chukwu to ascertain the true position of what made him to do that,” he said.

Ndukwe said that the coach was employed by the board of Rangers, adding that even if there were issues, the board that employed him ought to have been notified.

“This is a team that just won the league and if they are having any issues, we should be able to come to a round table to discover what the problems are and then sort them out.”

“Even if the coach is going to be fired or anything, let the people that put him there know what he was doing. You cannot just get up any morning and do things the way you like,” he said.

The commissioner said that at no time did the management of the team employ Okpala to replace the embattled Amapakabo. He said that the chief coach of the team,Chukwuma Agbo was currently in-charge of the team.

“This issue making the round of employing Sylvanus Okpala is nowhere to be found. It is unheard of. It is not discussed anywhere. The governor is not just somebody that takes things anyhow. If there is any Sylvanus Okpala in the Rangers camp, let him leave us alone, let us sort out our matter quietly,” Ndukwe said.