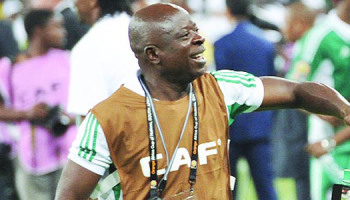 Despite media reports that former Super Eagles’ Assistant Coach, Sylvanus ‘Ouick Silver’ Okpala was appointed and given a letter of employment to resume as Technical Adviser of struggling Nigeria Professional Football League (NPFL) side, Enugu Rangers, AOIFootball.com has reliably gathered that the former Nigerian international is yet to resume work.
Coach Chukwuma Agbo, who was former coach Imama Amapakabo’s assistant, will take the team to Zambia to face Zesco United in the return leg of their CAF Confederation Cup playoff, according to those who should know in the camp of Rangers.

Agbo, a striker back in his playing days, had in the past coached Abia Warriors and the defunct pro-league side, Bussdor United.

The management of the Flying Antelopes are yet to publicly announce the engagement of Okpala, though reports say he has been handed a letter of employment to take over as gaffer of the reigning champions.
The team will depart Nigeria for Lusaka where they are billed to play the return leg at the Levy Mwanawasa Stadium in Ndola.