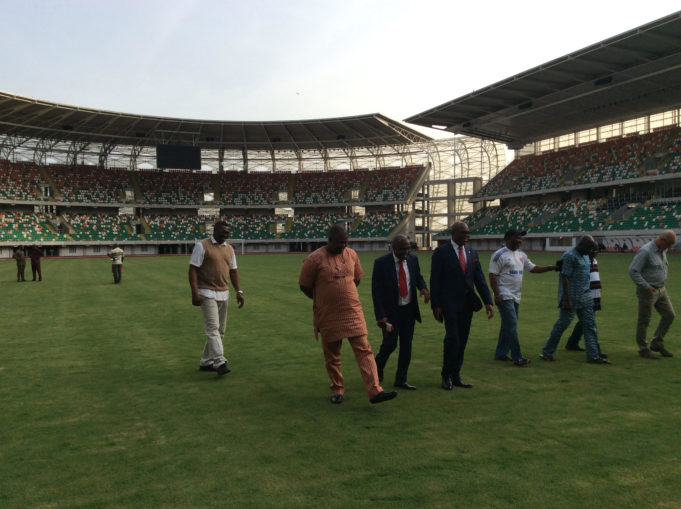 An inspection team led by the Chairman of NFF Technical and Development Committee, Barrister Chris Green has expressed satisfaction with the current state of the playing turf of Godswill Akpabio International Stadium, Uyo that is slated to host the 2019 Africa Cup of Nations qualifier between Nigeria and South Africa in eight weeks’ time.

Green, alongside NFF Deputy General Secretary, Dr. Emmanuel Ikpeme on Tuesday inspected the magnificent facility, nicknamed ‘Nest of Champions’ and which hosted the 2017 Africa Cup of Nations qualifier between the Super Eagles and Tanzania in September 2016, as well as the 2018 FIFA World Cup qualifying battle between the Eagles and the Fennecs of Algeria five months ago.

“We are delighted with the state of the playing turf and other facilities at the Godswill Akpabio Stadium,” Green told thenff.com. “I can tell you that the pitch is just as it was when the Super Eagles played Algeria in the World Cup qualifier in November last year.

“The fact that Julius Berger has also started some work on the turf is even more re-assuring. They are adding manure, and afterwards will do cutting and rolling, and they have the benefit of the weather at this period. By the time we host South Africa on 10th June, the pitch will be one of the very best anywhere in Africa.”

Tuesday’s visit to the capital of Akwa Ibom State was to ascertain the condition of the playing pitch and indeed other facilities at the Godswill Akpabio International Stadium, as well as the level of commitment of the State Government to hosting the big match.

After the inspection, the team reported: “Every inch of the field is covered by grass and the grass is lush green. Julius Berger (the company that built the stadium) has commenced work on the field for the purpose of bringing it to the best standard possible. Every other facility is in good condition. The condition of the field, as it is now, is good enough for matches to be played on it. The Akwa Ibom State Government has continued to show desire and commitment to hosting the match.”

However, in order to maintain the lush –green state of the pitch, the inspection team has advised that no activity be carried out on it until ongoing work is completed and the 2019 Cup of Nations qualifier between the Eagles and the Bafana Bafana is played.