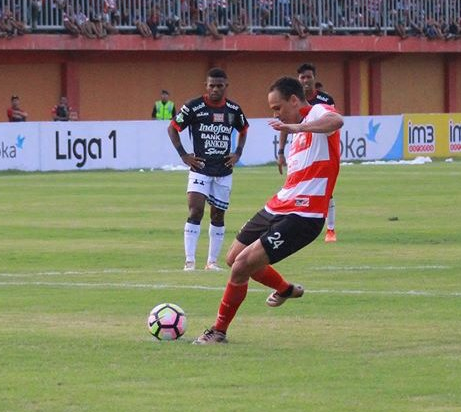 Former Super Eagles forward, Osaze Odemwingie scored his first goal for his Indonesian club Madura United AOIFootball.com reports.
The former West Brom Albion and Stoke City forward netted via the spot in the 74th minute to round up a comprehensive 2-0 victory for the team he joined last month as a free agent after leaving Rotherham United.

United defeated Bali United Pusam to start the league with a win.
Odemwingie has had a rough patch since suffering a serious injury two seasons ago while at English Premier League side Stoke City.

The former Lokomotiv Moscow forward also hinted at quitting his football career soon.
According to him: ”Daddy promised his little princess a goal before he retires from football and he did it in his first game for Madura United FC.”

He had a loan spell at Championship side, Bristol City, but failed to regain the form that made him a feared force in the English Premier League.

He is part of the big name players plying their trade in Indonesia with former Ghana, Chelsea and Real Madrid ace, Michael Essien, also in Indonesia, where he will also star in their Premier League.

Iheanacho wanted by German side