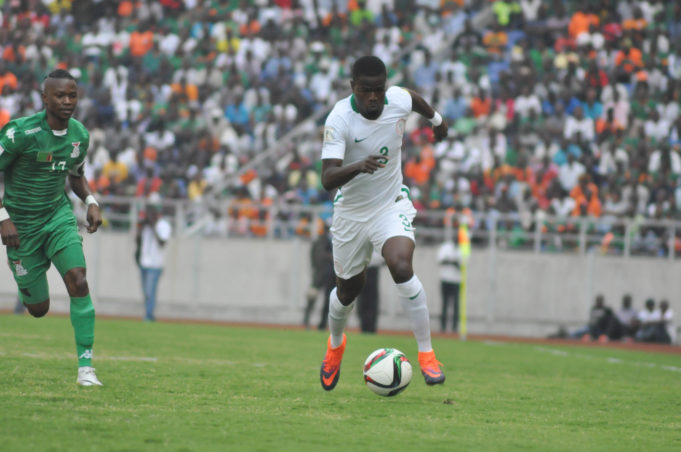 Super Eagles’ left wingback, Elderson Echiejile, has commended the Nigeria Football Federation (NFF) for the siting of the team’s camping in France ahead of the crucial Africa Cup of Nations qualifier against the Bafana Bafana of South Africa billed for the Godswill Akpabio International Stadium, Uyo.

The Eagles battle the South Africans on the 10th of June but will begin camping on May 23rd in Paris and will play Corsica, a tiny Island in France as part of preparations for the game.

“I think it’s a good arrangement by the football federation. We need to take the game seriously and not take anything for granted and France provides a good location for easy gathering of the team. It’s central and the players will not have issues coming in. It’s very important we have some time together before coming back for the game. I think it’s a perfect arrangement,” he told AOIFootball.com exclusively.

On his club career, the Sporting Gijon left wingback said that he is currently undecided about his next move after his loan spell at the Spanish club.

The AS Monaco player was loaned out in the January transfer window and has featured sparingly for the team- only two times and his biggest appearance was against FC Barcelona where his team lost scandalously by 6-1 at the Nou Camp.

“I’m undecided what’s next for me. I’ll review everything with my agent and then take a decision on the next move. I’m still focused on my time with Gijon and my contract with Monaco,” posited Echiejile.