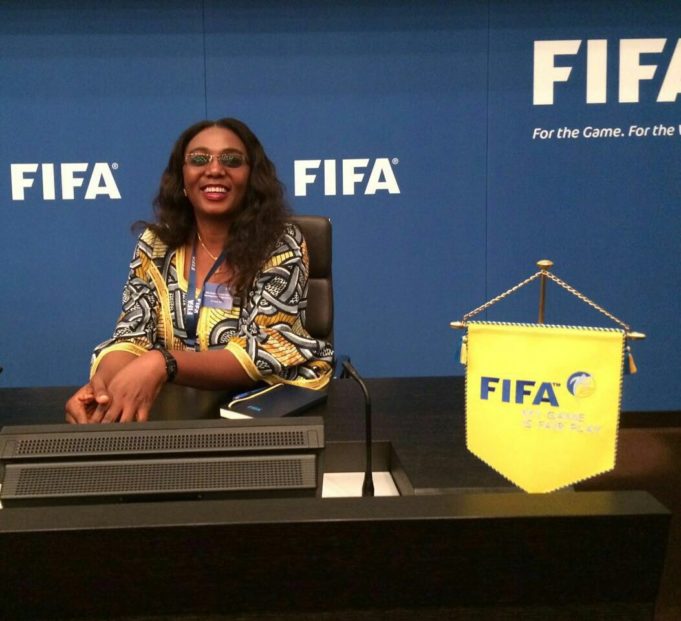 Ruth David is the Head, Women Football Unit of Nigeria Football Federation (NFF).
In this exclusive interview with AOIFootball.com’s ABIOLA SHODIYA, she discussed her experience at the FIFA Female Leadership Development Program (FLDP), the problems of women football in Nigeria and the Super Falcons lack of full patriotism after winning the Africa Women Championship last year. EXCERPTS:
How has it been since you became the head of women football unit of the NFF?
It has been nice, interesting and challenging. Nice and interesting in the sense that I’m a professional sports administrator and I’ve served all the women national teams in Nigeria as Secretary. I have gathered a lot of experiences during this period.
It’s been challenging in the sense that a lot of people are not in-tune with women football and its advantages. They seem carried away by the growth of the men’s game.
What are the factors responsible for the state of women’s football in Nigeria?
The factors are three. Poor funding, lack of awareness and the religion/culture.
The financial aspect has to do with inadequate funding to manage women football. The second factor is that many people are not aware of the benefits in women’s football. The cultural aspect is that the way and manner women footballers dress is in conflict with some cultures and religions in Nigeria. Therefore, there is conflict. You hardly find women from such areas taking part in football in Nigeria.
How do you think we can get over these challenges?
It’s not going to be an easy task, especially the aspects of religion and culture. Both the government, corporate organisations and individuals have a role to play. First, there’s a need to understand that providing an avenue for women to get engaged will help in fighting social vices in the society. We need to invest more in women football. When you look at it, corporate organisations have more interests in sponsoring men’s football. If they can bring such interests into women’s football, it’s going to assist the game develop in tandem with their male counterparts.
What informed the seminars you organised for women football?
The seminars where part of my project of the FIFA Female Leadership Development Program I attended. Then, each of us participants were asked to choose a project to work on which we’ll continue with after graduation.
In my own case, having served all the women national teams, and now the Head of the Women’s Football Unit, I realised that lack of proper education is a bane of women footballers in Nigeria.
I decided to look at education for character molding and career enhancement among female footballers in Nigeria. For them to see the value of playing football and education. So that they can have a program to fall back on, in case of retirement or inability to continue playing football.
What’s the level of success so far?
It was a success because we’ve been able to make them see the importance of combining football and education. As a matter of fact, many of them have indicated interests in going back to school. What is left is for us to follow up and ensure that those once pursue their education while still playing football.
Can you provide more insights on the FIFA Female Development Program you attended in the Netherlands?
My last trip was part of the training program where the course was concluded and certificates were awarded. I am now one of the graduates of the FIFA Female Development Program. I had the privileged of meeting and relating with the best female football administrators across the globe. The knowledge I acquired now makes me equipped to do the job as a female football administrator.
What other plans do you have to develop the game this year?
There are three aspects I plan to have. One of them is the developmental program, the second is the national team and the third is the league. On the developmental program, the NFF Women’s Football Unit is going to collaborate with the technical department, the youths committee and the league to come up with a developmental program for women’s football. Another aspect is that we’re going to embark on rigorous campaigns, especially in schools where we’re going to educate young female student players on football. On the national team, I’m looking at the educational enlightenment program which I’ve started. I’ll continue with that. Because of what happened with the Super Falcons the last time, not showing patriotism, I’m also going to look at how to make them think of patriotism and nationalism. You don’t think of money alone, you also think of serving your country and taking your country higher.
Any program for parents?
There’s a program, a FIFA program I’m about to start, it’s called ‘Live Your Goal’. The Live your goal is about telling parents that children can go to school while they allow them play football, if that’s what they want. If you make them understand they can combine the two, then you are certain there’s a future.