Enugu Rangers will trade tackles with Coal City Youths in the final of the Enugu State FA Cup on Sunday.

Rangers reached the final of the FA Cup at the expense of FC Stars Plus with a hard fought 3-1 defeat on April 27, while Coal City Youths beat FC Inter 5-4 on penalties after a goalless draw on April 21.

Enugu State FA Secretary Francis Ugwu said the match between Rangers and Coal City Youths would start at 4 p.m, while the third place match between FC Star Plus and FC Inter would precede the final at 1.30 p.m. on the same day.

Meanwhile, MFM FC of Lagos have equally reached the semi final of the Lagos FA Cup after defeating Ikorodu United 4-1 at the Teslim Balogun Stadium.

Sikiru Olatunbosun opened the scoring in the 10th minute before Chidi Akuneto’s brace took the game beyond Ikorodu United. Adekunle Adegboyega’s goal on the 65th minute ended the game competitively. 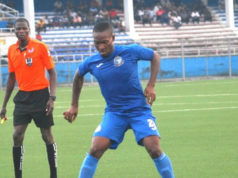 W/Cup Draw: Nigeria not afraid of any team- Rohr