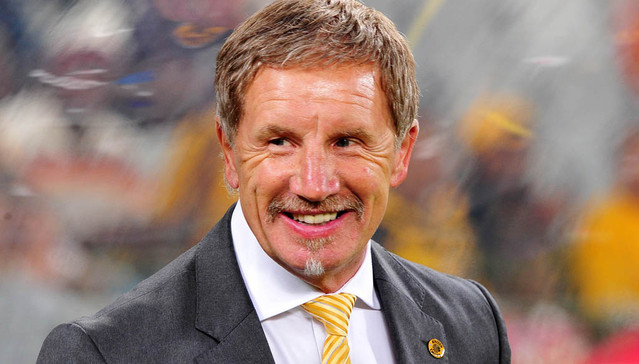 According to a statement issued by SAFA on Thursday afternoon, Supersport United coach Stuart Baxter will be officially unveiled by president Danny Jordaan when he returns to South Africa from CAF and FIFA commitments in Egypt AOIFootball.com reports.

‘‘The Supersport United coach will, meanwhile, continue to fulfill his coaching responsibilities at the club for the remaining four Absa Premiership fixtures as well as the Nedbank Cup and Confederations Cup,” said the statement.

‘‘SAFA and Supersport United have agreed to work together to ensure that the Baxter gets time off post the final league match on 27 May to prepare Bafana Bafana for the upcoming AFCON match against Nigeria.”

This is Baxter’s second spell as Bafana coach and he coached the national team between 2004 and 2005.

But he quit the tough job in November 2005 after he failed to qualify the side for the 2006 Soccer World Cup.

He won 10 of his 23 games in charge of Bafana first time round‚ drawing six and losing seven.

He has since gone on to enjoy considerable domestic success‚ including two league championships in three years at Chiefs‚ as well as a Nedbank Cup victory with SuperSport last May.

The Bafana coaching seat has been vacant since Mashaba was sacked in December last year.

Ephraim ‘Shakes’ Mashaba was fired after he was found guilty on several charges‚ including “gross misconduct and insubordination”.

However, the former Bafana coach is challenging his dismissal and has taken his case to the Commission for Conciliation‚ Mediation and Arbitration.