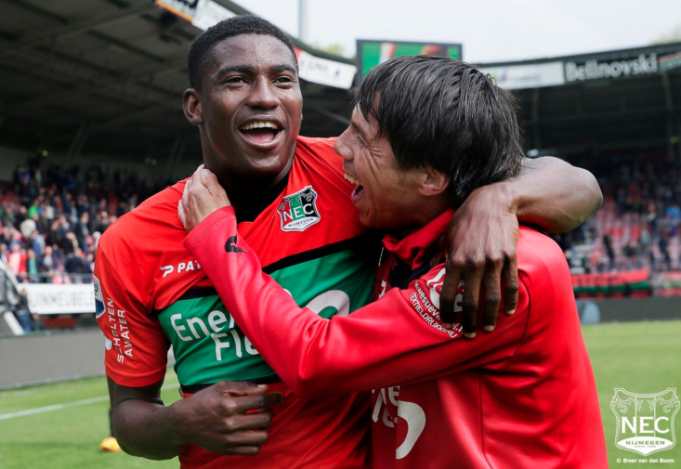 Former junior international, Taiwo Awoniyi has scored his first league goal in Holland’s Eredivisie where he is currently playing for NEC Nimegen AOIFootball.com reports.
Awoniyi has featured nine times this season for the Dutch side, putting in a total of 923 minutes before getting his first professional goal.
The forward was signed up by English Premier League side, Liverpool after the FIFA U-20 World Cup in New Zealand, but was however loaned out to Nijmegen.
The forward came off the bench in the 83rd minute for defender Wojciech Golla.
Awoniyi’s match winner was scored in the 88th minute in the encounter which was a home game against AZ Alkmaar. His side won 2-1.
Another Nigerian, Fred Friday was on for Alkmaar.
Nijmegen are currently in the relegation zone as they are placed 17th on the table with 31 points after 33 games.

We will not underrate Corsica – Echiejile

Eagles were lackadaisical during the 2006 World Cup qualifiers, says Abbey

Russia 2018: Rohr must not dump players who featured in qualifiers- Lawal