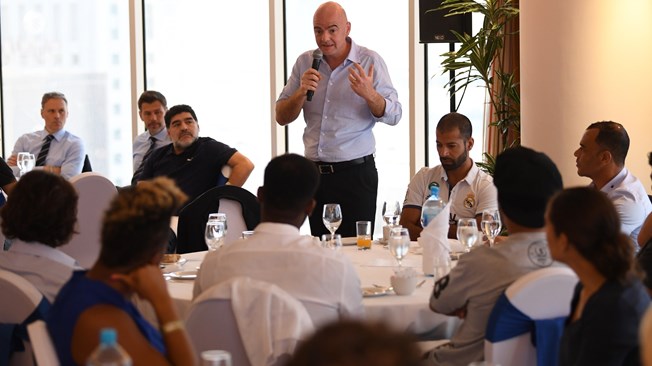 As part of the 67th FIFA Congress, FIFA President Gianni Infantino headed up the latest ‘think tank’ session with the members of the FIFA Legends team in Manama, Bahrain. The gathering gave some of the leading figures on planet football the opportunity to express their views on some of the burning issues of the day, AOIFootball.com reports.

Former Nigerian International Austin ‘Jay Jay’ Okocha was part of the FIFA Legends in attendance in Bahrain and they all had a session where they shared their thoughts about the future of the round-leather game.

“The main focus has to be on football, and to achieve that we have to listen to the central characters, who are none other than you. We want to get you even more involved in everything that we do and to find out what you think about the decisions we want to take,” said President Infantino at the start of a session that brought together more than 20 elite players past and present from every FIFA confederation.

Among other issues, the group discussed how to make the most of future meetings to achieve greater impact in countries where the game has yet to be developed.

“You get the sense that FIFA is listening to the people who’ve played football, which is crucial because we have a sharper vision of the game when it comes to new developments taking place around the sport,” said former Argentina international Pablo Aimar. “It’s not just about development, but also the use of technology and the expansion of the World Cup, which is always good.”

The session also saw a clear explanation of how video refereeing works and a discussion of the main challenges facing both the men’s and women’s games today.

Giving her view on the session, Alex Scott, who formed part of the England side that finished third at the FIFA Women’s World Cup Canada 2015™, said: “The opportunity to be listened to and to have our opinions taken into consideration alongside some of the greatest players in history is vital to strengthening the development and the image of the game. The way to do that is by meeting up and exchanging ideas.”

In echoing that view, former Canada international Karina LeBlanc said: “FIFA invited us to make our views known a year ago and they’re backing that up. These meetings are very important, and there’s no question we’ll all be taking away a lot of things that we can discuss and share in our countries. The focus is on improving the game and making football better. I’m sure that everything’s being done to make that happen.”