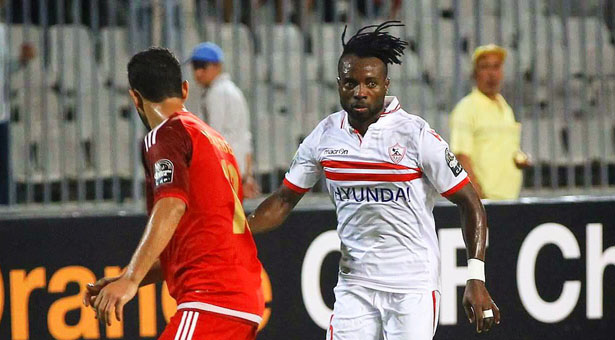 The five-time champions scored twice in the second half to overcome brave CAPS United of Zimbabwe 2-0 during matchday 1 in Alexandria.

Several squandered chances and acrobatic saves from CAPS goalkeeper Edmore Sibanda kept the Group B clash goalless until half-time at the Borg Al Arab Stadium. But Sibanda was at fault for both goals with Basem Morsy giving 2016 runners-up Zamalek the lead on 56 minutes. The striker scored with a header off a “Shikabala” cross that Sibanda appeared to have covered but allowed to slip from his grasp. Slow-reacting Sibanda was found wanting again seven minutes from time, allowing Okawuchi to nod a corner into the net at the near post.

Zamalek lie second on goal difference after USM Alger of Algeria trounced Al Ahly Tripoli of Libya 3-0 in Algiers. Headed goals from Farouk Chafai and Madagascan Carolus Andriamatsinoro gave 2015 runners-up USM a two-goal cushion by the break. Oussama Darfalou completed the rout seven minutes from time by finding space inside the box and firing a low shot into the corner of the net. Etoile Sahel of Tunisia made an impressive Group A debut by hammering Ferroviario Beira of Mozambique 5-0 in Mediterranean resort town Sousse. Brazilian Diogo Acosta opened and closed the scoring with goals after 14 and 70 minutes for the winners of nine CAF titles. Guinean Alkhaly Bangoura and Tunisians Hamza Lahmar and Hameur Bouazza were the other scorers for the only club to win all five present and past CAF competitions.

Al Merrikh came from behind to hold fierce Sudanese rivals Al Hilal 1-1 in Omdurman in the other match in the group. Esperance of Tunisia made an impressive start in Group C by winning 3-1 at home to V Club of the Democratic Republic of Congo in the Tunis suburb of Rades. Cameroonian Yazid Atouba rattled the “Blood and Gold” with a 10th-minute goal that was cancelled by Malian Fousseny Coulibaly midway through the opening half.

Taha Yassine Khenissi gave twice champions Esperance the lead before retiring injured late in the opening half. It took the hosts until three minutes from time to seal maximum points through a goal from Anice Badry.