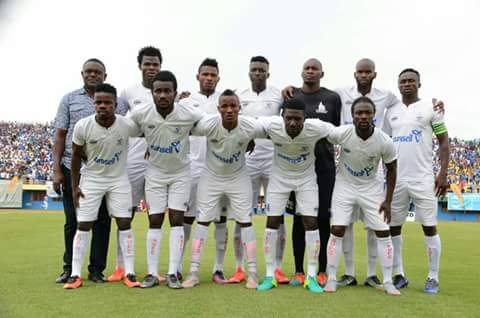 Rivers United started their CAF Confederation cup campaign on a losing note as they fell  3-1 at Club Africain of Tunisia on Sunday night in Tunis.

Rivers United had a penalty only for winger Emeka Ogbugh’s to miss from the spot and that ultimately highlighted the very interesting encounter at the Stade Olympique Rades in Tunis AOIFootball.com can report.

Algerian winger Ibrahim Chenihi delivery from their first corner kick of the match from the right met the head of Bilel Iffa on the far post as he rose highest to plant his header inside the net for Club Africain’s opening goal.

United’s John Odumegwu threw away an opportunity to find the Tunisians back of the net early on but opted to square the ball for Sarkin when he should have taken a bite at goalkeeper Farouk Ben Mustapha.

Rotimi Sunday was time and again forced to make saves as the home side continued to press.

Darragi scored Africain’s second from the penalty spot kick after a player was fouled in the box and the home side took a comfortable 2-0 lead going into the break.

Rivers United halved the deficit eight minutes after the restart when John Odumegwu scored and was assisted by Nzube Anaezemba.

Club Africain regained their two-goal cushion on the 70 minutes, when Togolese defender, Joseph Doughadji turned into his own net a cross from the right hand channel after goalkeeper Sunday Rotimi had stretched to pick the cross.

It was a moment of despair for the Nigerians who now fall further behind with 20 minutes left for play.

FUS Rabat of Morocco are now top of Group A after they defeated Kampala City Council of Uganda 3-0 on Saturday.

United will host FUS Rabat on May 24 after KCCA have hosted Club Africain the previous day.

Hard work, the secret to my great start this season- Simy Nwankwo