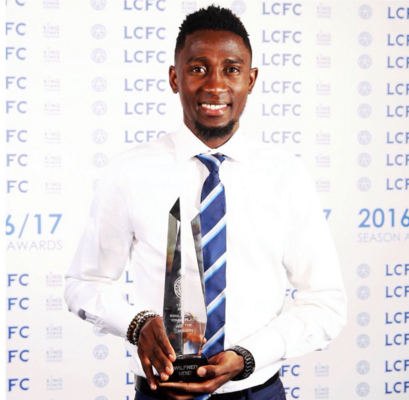 Super Eagles’ youngster, Wilfred Ndidi has taken out time to thank all those who supported him after he was named ‘Leicester City’s Young Player of the Season’ at an award ceremony organized by the club on Monday night, AOIFootball.com reports.
Ndidi joined the foxes in the January transfer window to replace French player N’Golo Kante who was sold in the summer to Chelsea and like hot knife through butter, he cut in perfectly into the main team, putting up superb displays on match days.
The former KRC Genk midfielder has featured 20 times in all competitions with three goals to show.
He tweeted: “A special thanks to God and also to everyone that made this possible, so much love for you all #itcanonlybeGod #LCFCAwards.”