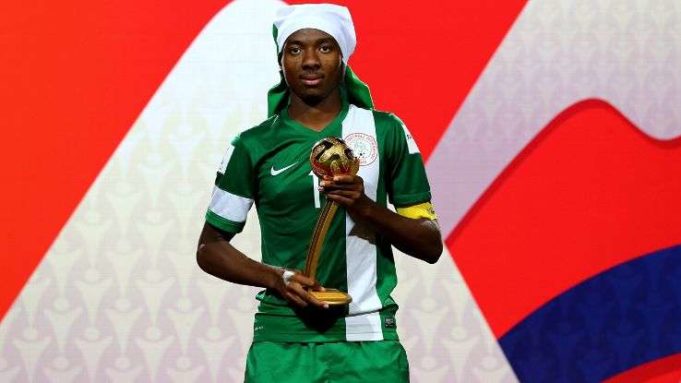 The entire Nigeria football sphere gave a collective nod of approval when the deal that took Kelechi Nwakali to Arsenal was announced. Everyone expected it; it had been in the works for months and there was an air of inevitability to it. After his truly phenomenal display at the 2015 U-17 World Cup where he led Nigeria to the trophy, he put forth a puzzling conundrum to the FIFA technical team as to the role in which he played during the tournament.

He fulfilled different briefs, the quarter-back role, bombed forward from deep and showed incisive passing when he occasionally found himself in the hole.

The 18- year-old got shipped out on loan to MVV Maastricht in the Jupiler League, the second tier of the Dutch League where he has featured 29 times in all competitions with two goals, three assists and a lot of affection from the Maastricht fans. The midfielder has contributed immensely to Maastricht’s push for a place in the Dutch Eredivisie, which could see the wearer of stars competing in the top flight since 2000 if they scale the tortuous hurdle of the playoffs.

Testament to his influence and ability he was named Arsenal’s Best Loanee by Arsenal youth scout, Jeorge Bird who commended his ability to ‘frequently burst forward to excellent effect’. The prodigy still green around the ears, has a lot to learn, his shooting could use some work, as well as his positional awareness.

While MVV Maastricht has provided that platform in the current season, the Super Eagles has not as much as cast a glance at Nwakali.

The Super Eagles is certainly no day care where every player with some potential can come ‘shit the bed’, but for some truly exceptional talents, it could be the springboard needed to propel them to superstardom, from wonder-kid to world beater.

It is therefore a little surprising that the precocious teenager has not been extended an invite at any time by the Super Eagles’ gaffer, Gernot Rohr. Even more so since the German coach has shown no aversion to youth as evidenced by the average age of the side he selects.

A place in the squad perhaps, for Nwakali is not unmerited, seeing some other youngsters have gotten look-ins. Victor Osimhen, also a stellar cast in the class of 2015, and Noah Bazee, 20, get the rub of the green with their recent call-ups. Osimhen has been extended three call-ups since Rohr took over the reins; compared to Nwakali’s 29 matches and Jupiler league second round playoff, the striker has featured just once for his club, Wolfsburg, though no fault of his own as strings of injuries has kept him from being competitive. Bazee, who plies his trade in the Bundesliga II with Hannover has played 14 times for the German side and has gotten two call-ups.

With Ndidi’s success at Leicester City, including an award bagged this week as the club’s young player of the year, and Etebo’s brilliance whenever he dons the green and white, a starting place is wishful thinking. Then there’s elder statesman, Mikel and Onazi to compete with, though it’s less a contest, more a drubbing and on the pecking order, Israeli League Champion and Hapoel Be’er Sheva midfielder, John Ogu is still ahead and by some margin.

The former Golden Eaglets captain, however could benefit from having arms around his shoulders and sage words. Nwakali is apt to pick more than a few things being around a crop of more experienced players, learning the ways and identity of a side he just might lead in a couple of years from now. With his head screwed on his shoulders and his supreme talent, he is certainly set to be just more than a squad player.

Well, if he is one for the future, the future might as well start now.

Our destiny is in our hands– Abia Warriors’ Coach