Home FIFA Confederations Cup FIFA Confed Cup: I’ll be rooting for Cameroon, says Okocha
SHARE
Facebook
Twitter
Former Super Eagles’ captain, Austin ‘Jay Jay’ Okocha, has said he would support the Indomitable Lions of Cameroon at the FIFA Confederation Cup following Nigeria’s failure to qualify for the tournament that brings about the best from all the continents, AOIFootball.com reports.
Okocha made this assertion when he visited one of the host cities, Kazan, where he, alongside Brazilian soccer legend, Ronaldinho Gaucho launched the fans’ park.
The former Bolton Wanderers’ captain told fifa.com that he would opt for Cameroon since his country Nigeria didn’t qualify for the FIFA Confederation Cup in Russia.

The champions of each continent are playing at the Confederations Cup, so there’ll be a very high standard of football. There will be supporters from all over the world, but Russia will have the best support. It’s a shame that Nigeria didn’t qualify, so instead, I’ll be supporting Cameroon,” Okocha said.
Nigeria currently leads their World Cup qualification group with six points from two games and will play Cameroon for a double header fixture on August 28 and September 2.
Okocha played at the FIFA Confederation Cup in 1995, then called ‘The King Fahd Cup’ and Nigeria came 4th after losing 5-4 to Mexico in the third place play-off. 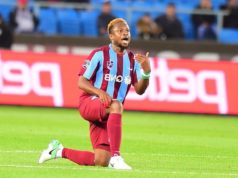 Onazi to start as Trabzonspor travel to Antalyaspor 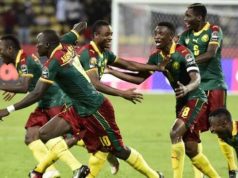 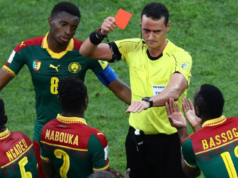