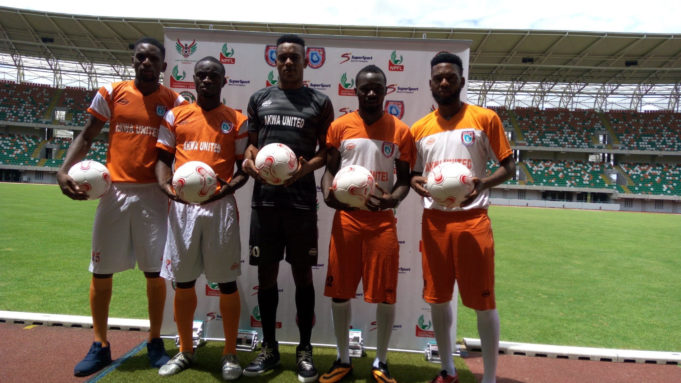 Nigerian Professional Football League (NPFL) outfit, Akwa United Football Club of Uyo, have made five new additions to their squad ahead of the second half of the season.The players were unveiled on Wednesday at the Godswill Akpabio International Stadium, home ground of the team.After seeing the Super Eagles and Pillars’ man, Alimi Jamiu’s deal fall through some weeks back, the “Promise Keepers” signed the players from different clubs to reinforce their different playing positions.The five new additions consist of one goalkeeper, one midfielder and three strikers. They include: Ojo Olorunleke, Christopher Lolo, Harmony Ikande, Edem Akakatang and one time Super Eagles of Nigeria invitee, Gabriel Okechukwu.Goalkeeper, Ojo Olorunleke joined the Promise Keepers from Sunshine Stars of Akure till the end of the season and he is going to be wearing jersey number 30.Christopher Lolo, a midfielder was signed from Katsina United. Lolo got a good number of assists for his former club and is expected to add more spice to the Akwa United midfield. He was handed the number 32 jersey.Striker, Edem Akakatang was recruited from the ranks of the Akwa United feeders team, Akwa Starlets, till the end of the current NPFL campaign. He is going to be kitted in the number 27 jersey.Harmony Ikande has played in Israel and in Italy for Serie A side, AC Milan amongst others. He was signed to Akwa United from Aris Limassol of Cyprus. It is expected that his wealth of experience will help the team. Ikande will rock the number 19 jersey till the end of the season.Last but not the least is forward man and one-time Super Eagles’ invitee, Gabriel Okechukwu. He was one of the players invited by Late Stephen Keshi to play Chad in an AFCON 2017 qualifier in 2015. Okechukwu put pen to paper from FC Karpaty Lviv of Ukraine. He will be wearing the number 25 jersey till the end of the current NPFL campaign.Chairman of the Club, Paul Bassey, said he was satisfied with the quality of the new players and has charged them to bring in their wealth of experiences. Bassey also told them to be dedicated and committed to the team’s programme.
Akwa United are momentarily seating 5th on the NPFL log after accruing 29 points from 19 games. Their first fixture of the NPFL second round is an away visit to MFM FC of Lagos on May 21.

Abdulquadir Adedapo - May 27, 2019
ALL CATEGORIES
SOUNDCLOUD