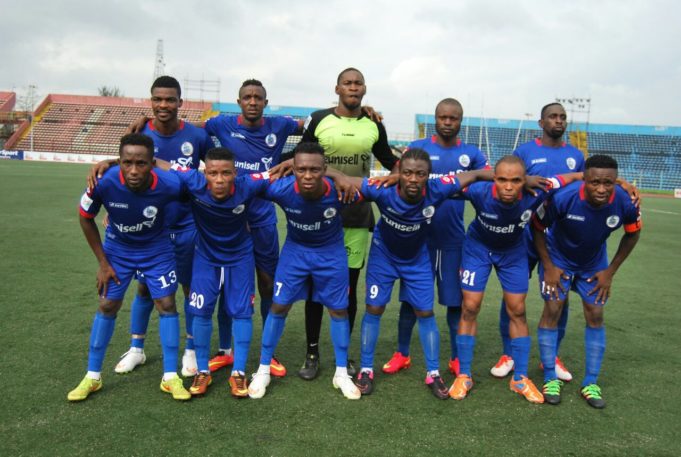 The weekend is already lighted up as Rivers United and Nasarawa United kick started Match day 20 of the Nigeria Professional Football League with the ‘Pride of Rivers’ winning courtesy of Ayo Saka’s 39th minute solitary strike. United had just signed Saka and he delivered when he mattered most.

Meanwhile , the race on all fronts in the Nigeria Professional Football League (NPFL) takes the driving seat with a finely-balanced contest between MFM FC and Akwa United set for the Centre of Excellence, Lagos on Sunday.

There will be the battle for the title, the race for survival, the chase for the golden boot and also the safest hands between the sticks. One of such battles has its setting at the Agege Stadium where two teams, Akwa United and MFM FC, now considered title contenders of some sorts by a number of pundits will go head-to-head.

Akwa United and MFM start the second round of the season in the top-five and their coaches have made it clear that they intend to challenge for the title, or end up in the top-three at the end of this campaign.

MFM coach Fidelis Ilechukwu and his Akwa United counterpart, Abdu Maikaba are known for setting up their teams to play expansive style of football – pressing play, short passes and use of wide men. The two teams have scored a joint 47 goals after 19 rounds of matches – 13 per cent of the total goals recorded so far this and that should shape the game as a contest that will involve goals as their last three NPFL meetings have produced nine goals. In Stephen Odey, MFM can boast of one of the free-scoring talent in the country at the moment. Odey has scored 14 times and provided two assists in 16 appearances. There is also Sikiru Olatunbosun whose mazy runs and intricate style has seen his goal against Rangers earn Worldwide acclaim and voted CNN Goal of the Week. On the other hand, Maikaba’s Promise Keepers are not in the city of Lagos for just sight-seeing. This time they have quite a squad with the like of Alhassan Ibrahim, Christian Pyagbara, Moses Ebiye, Amaechi Orji as well as former MFM boys, Ifeanyi Ifeanyi and Musa Newman, who can all change a game on its head. Last season, Akwa United found no joy at the Agege Stadium in this same fixture. Their off-colour performance meant they were outplayed and dismissed three-nil by a very mobile MFM team on the last day of April last year. Interestingly, Odey and Olatunbosun scored the goals with the latter helping himself to a brace. Under Maikaba this time, Akwa United have become one of the teams to watch despite an early season blip that saw them winless in their opening five matches. In the reverse game at the Nest of Champions, Akwa United hit MFM 2-0 with Alhassan and Ubong Friday accounting for the goals. Alhassan just like his team will be hoping to catch up with Odey in the race for the top scorer. However by the time referee Abdullahi Shuaibu ends proceedings it is hoped that this tantalizing fixture will live up to its billing – having produced two plus goals in each of its last three matches. In Port Harcourt, two of the league’s best defending sides square up at the Yakubu Gowon Stadium.

NPFL champions Rangers will hope to put their relegation worries to bed when they host Gombe United having played out a 3-3 draw just over a week ago. League leaders Plateau United hit the road to face Katsina United. This game is a banana peel for Kennedy Boboye and his table-toppers who are seeking to land a first league title. Six other matches will take place in Akure, Bauchi, Ibadan, Ilorin, Kano and Sagamu.