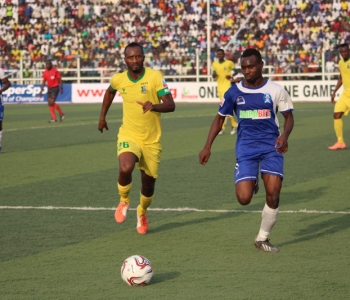 Enyimba defender, Chinedu Udoji has said that no club should glory yet because of their successes in the first round could be overturned at the end of the season.  Udoji, who said that the championship is still wide open, told AOIFootball.com that the second stanza of the league would produce some major upsets that could turn the table upside down.
“We are prepared for everything that is going to happen in the second round; we have learnt our lesson in the first round and we don’t want to repeat those mistakes again.
“The door of the league is very wide open and I believe that if we play well, the last can be the first and the first can be the last at the second round.
“For those that have written Kano Pillars off, the game is being played on the pitch and not just all talk; if Plateau United can top the league after 19 games, who says we cannot do the same in the second round, or another team can’t?” said Udoji.

My target is to reposition Lobi Stars for glory – Ogunbote