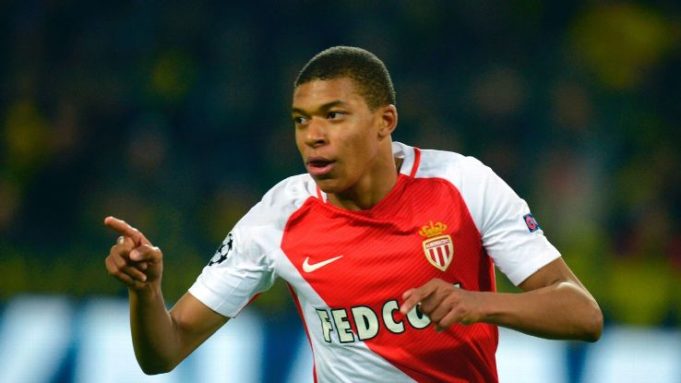 French Ligue 1 champions, AS Monaco have turned down a world record fee of around 120 million Euros (103 million pounds) from Spanish giants, Real Madrid for teenage striker, Kylian Mbappe.
The UEFA Champions League finalists tabled their bid in the last couple of days for the sensational 18-year-old forward. This deal beats previous fees being paid by Real Madrid for four-time World Footballer of the Year, Cristiano Ronaldo and former Tottenham Hotspurs man, Gareth Bale.
Mbappe is currently one of the hottest teenagers in world football and the most wanted player in Europe after helping his side win the French title and a UEFA Champions League semifinal berth.
However, the French champions are not looking to offload the former Clairefontaine Academy man as they are instead, hoping to agree a new deal with him.
According to Telegraph Sport, Monaco Vice President and Chief Executive, Vadim Vasilyev, steadfastly refused to discuss details of any bids for Mbappe, insisting that such negotiations were confidential.
Vasilyev would also not confirm Real’s interest, although sources close to the offer have suggested it is genuine.
Vasilyev said: “The plan is to do everything to prolong him (Mbappe) and to do everything that he stays a minimum one more year with us.”
Asked directly whether Monaco will turn down bids for Mbappe, Vasilyev added: “We will, although that will depend, of course, also on the player. We will make an offer to prolong his contract and hopefully he will accept and stay with us. I think in the month of June, before the season starts.”
Vasilyev added: “He will definitely be one of the top players in the world. He has everything to succeed. He has the skills, the technique, the speed, the mentality, the competitive spirit. He has a great family who surround him. He has all the ingredients to be a world success.”
Mbappé has been described as a “huge football talent” who “has similarities to Thierry Henry” according to Arsenal Coach, Arsène Wenger.
Also, several highly rated pundits have stated that the similarities between Mbappé and Henry make him one of the most exciting prospects in world football.

Hamstring Injury: Onyekuru out for 10 days