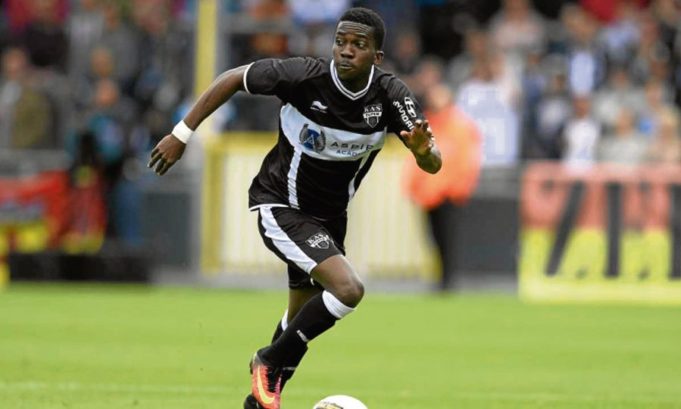 Hot striker and joint top scorer in the Belgian domestic league, Henry Chukwuemeka Onyekuru, has put Arsenal on red-alert after making his intentions known in December 2016 that he would like to pitch his tent with the Premier League giants.
He revealed that his ambition to make the move to the Emirates comes from the fact that his idol while growing up was Arsenal legend, Thierry Henry.
Onyekuru added: “Football was my relaxation after school with my friends, we watched the Premier League every weekend.
“I’m a huge Arsenal fan, Thierry Henry is my idol. Now I’m a professional footballer, I try to copy him as much as possible. I look back to the games I saw as a boy, but I also regularly watch videos on YouTube to see how he did certain things.”
The 19-year-old forward is joint top scorer alongside Łukasz Teodorczy in the Belgium domestic league with 22 goals, however the award was given to Teodorczy because he scored more away goals.

Onyekuru began his football career with the Aspire Academy in 2010, and graduated in 2015 joining their partner club, K.A.S. Eupen.

The Nigeria starlet helped the team get promotion to the Belgian First Division A in his first season, and made his professional debut in a 3-0 loss on the 30th of July 2016 against S.V. Zulte Waregem.
It is reported that two unnamed English clubs are in talks with his representatives and are keen on securing the services of the teenager. Sources close to the player said they were confident the forward would play in the Premier League next season.
Onyekuru, who has a £6.8m release clause in his contract, has already turned down moves to Belgian giants Brugge and Anderlecht.
It is also understood that Scottish side, Celtic came close to signing him in January but Eupen refused to sell him during the winter transfer window.
Onyekuru was recently called up by Coach Gernot Rohr to the Super Eagles Corsica/Paris camp that is to open later this month as a replacement for Kayode Olanrewaju.

Super Eagles’ are not motivated by cash – Ogu