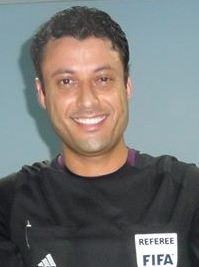 The Confederation of African Football has appointed Tunisian arbiter, Youssef Essrayri as the referee for next month’s 2019 Africa Cup of Nations qualifying match between Nigeria’s Super Eagles and the Bafana Bafana of South Africa in Uyo.

The match commissioner is Andy Quamie from Liberia and Kotey Alexander Neequaye from Ghana will be referee assessor.

The encounter at the Godswill Akpabio International Stadium, Uyo on Saturday, 10th June will open the curtain on the qualifying race in Group E for Cameroon 2019, with only the group winners guaranteed slots at the finals. Libya and Seychelles are the other teams in the pool.

Meanwhile, the Super Eagles had their first training session in Ajaccio on Wednesday morning, ahead of Friday’s friendly match against the Corsica Senior Team at the Stade Francois Coty.

An interesting game is at hand for the three –time African champions, against a team that has only lost once in the nine matches it has played since forming a squad in 1967.

The only defeat the Corsica Senior Team has suffered was a 0-1 reverse to the Indomitable Lions of Cameroon in a friendly in Bastia on May 14, 1998. The Lions were then preparing for the 1998 FIFA World Cup finals in France.

The only time Corsica had played 1998 FIFA World Cup champions France was in February 1967, and the former won 2-0.