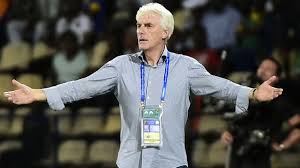 Though he led Cameroon to a fifth CAF Africa Cup of Nations title in Gabon earlier this year – the Belgian’s first honour as a national team coach – he admits such successes do not play with his emotions.

“I am someone who is realistic, who can put things in perspective,” Broos said in a recent interview with FIFA. “For example, I am never extremely happy, and I am never extremely low. I like discipline. For me, this is a necessary thing. If there is no discipline in a team, where you work with 30 people, then it will become chaos and it will be impossible to achieve anything.”

The 65-year-old’s emphasis on team discipline will be needed next month, as the Indomitable Lions will represent Africa at the FIFA Confederations Cup Russia 2017. It will be Cameroon’s third trip to the Tournament of Champions, having made the final in their last appearance back in 2003.

“Apart from Russia, you are in with the seven best teams in the world because they are all champions of their continents, so you are at a very high level,” Broos said. “This is why I think we have to start this tournament with modest expectations and try to get through the first round, which will be hard.”

Group B challenge
The last team to qualify for Russia 2017, Cameroon are drawn in a difficult group that includes FIFA World Cup™ holders Germany, Copa America winners Chile, and AFC Asian Cup champions Australia. Broos’s side will begin their campaign against the Chileans in Moscow on 18 June before meeting the Australians in Saint Petersburg four days later. They conclude their Group B schedule against the Germans in Sochi on 25 June.

The future that Broos refers to is next year’s World Cup in Russia, with Cameroon also involved in the third and final round of African zone qualifying that resumes later this year.

“If I had the choice, I’d rather be in Russia next year,” Broos said. “This is why this tournament is important to me because next year in Russia we might face these teams again. We want to see where we stand and at which level we are at right now.”

Eagles will do well in Russia, says Kalu Orji