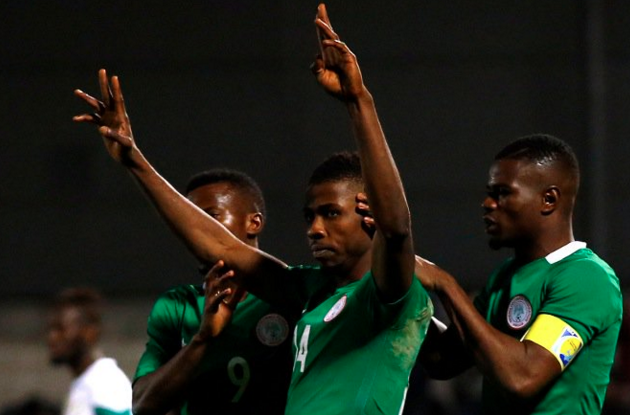 Tyronne Ebuehi, Chidozie Awaziem, Mikel Agu, Ibrahim Alhassan and Arsenal target Henry Onyekuru all made their unofficial debuts for the Super Eagles having been included in the starting 11.

MFM’s Stephen Odey, top scorer in the Nigeria Professional Football League with 14 goals halfway through the season, and Sikiru Olatunbosun also made their bows for the Eagles after coming on in the second half.

The friendly is part of the Eagles’ preparation towards their 2019 Africa Cup of Nations qualifier against South Africa in Uyo in June 10.

Corsica got off to a perfect start after Jean-Jacques Mandrichi converted a penalty in the fifth minute after Ebuehi was penalised for handling the ball inside the box.

The Eagles almost drew level in the eighth minute through Onyekuru but he could not finish off Ahmed Musa’s pass despite going one on one with the Corsica keeper.

In the 24th minute the Eagles went close again but Akwa United star Alhassan headed over the bar from close range after a brilliant cross from Echiejile.

With 10 minutes remaining in the first half, Musa failed to score from close range after the Corsica keeper spilled Alhassan’s initial effort.

The Eagles continued from where they stopped in the first as they went in search of the equaliser by dominating possession in the early part of the second half but Corsica held firm.

In the 58th minute Odey was brought on for Alhassan and made an immediate impact on 60 minutes as he forced a save off Corsica keeper Nicolas Penneteau.

The Eagles made another change as Olatunbosun replaced Musa in the 62nd minute.

Penneteau was called into action again on 65 minutes after denying Iheanacho after build-up play from Oghenekaro Etebo and Olatunbosun.

In the 68th minute, the Eagles made another substitution with Shehu Abdullahi replacing Ebuehi.

Iheanacho eventually made it 1-1 in the 80th minute from the penalty spot following a foul on Etebo inside the box.

The Eagles next friendly game is against Togo on Thursday, June 1, in Paris.