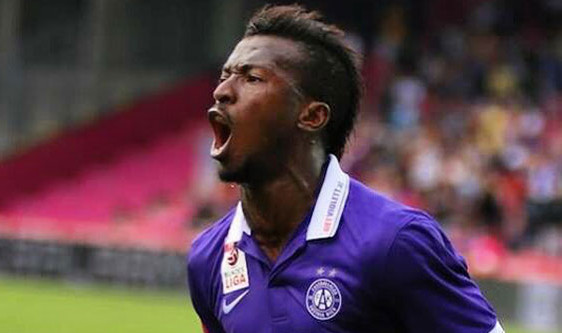 Super Eagles’ forward, Olanrewaju Kayode banged in his 17th league goal of the season as his team, Austria Wien suffered a disappointing home loss on Thursday.

Kayode got Austria Wien’s second goal of the game in the 29th minute to give a 2-0 lead to his side, but Salzburg came up with an impressive come back to win the game 3-2.

Nigerian, Olanrewaju Kayode, who will miss the Super Eagles’ friendly match with Corsica Island on Friday due to persuasions by his club, also got a yellow card in the 89th minute of the game.

Kayode’s wife Zinny Kayode, had taken to Facebook to celebrate her husband’s goal after the sleeky forward scored in the 29th minute but, was left disappointed after her husband’s club eventually lost the match.

Austria Wien now face a competition from Strum Graz as they hope to seal a Europa League spot with both team on 60 points after 35 matches with one more game to the end of the Bundesliga. But Wien have a better goal difference.

AFCON 2019: Nigeria will come for revenge in Johannesburg, says Baxter