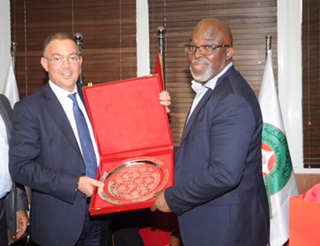 On Thursday, NFF President Amaju Pinnick and NFF 2nd Vice President/LMC Chairman Shehu Dikko put pen to paper on a memorandum of understanding with their Moroccan counterparts, the result of detailed discussions, deliberations and considerations over time. The FA Presidents signed their own side in the offices of the Federation Royale Marocaine de Football in Rabat, while Dikko and and Chairman of the Ligue Nationale de Football Professionnel, Said Naciri signed at the LNFP office, watched by the two FA bosses.

Both Pinnick and FRMF President Fouzi Lekjaa (who is also Director of Budget in the Kingdom of Morocco) are Members of the CAF Executive Committee.

“The strategic partnership is for technical development, exchange of ideas and contacts, training support, friendly matches, use of facilities and joint marketing where necessary,” Dikko, who is also Chairman of NFF Marketing, Sponsorship and Television Advisory Committee and NFF Strategic Committee, explained to thenff.com. “Morocco has one of the best technical centres globally and they are still developing it, and they are delighted to make the facilities available for use by the National Teams of Nigeria and Nigerian Clubs. The Kingdom also has one of the most innovative structure in managing the domestic media rights of both their National Teams and the elite League, which we intend to replicate.

“The agreement between the two League bodies is to collaborate in areas of mutual interests between the Leagues and participating Clubs. The Moroccan FA only recently set up an independent elite League body in line with global practice, and wants to learn from LMC Governance Structure of the NPFL. On their side, they would help our Clubs understand the structure and principles of community club ownership, elite players development, youth development et cetera. It is all about fostering mutually beneficial relationships.”

On Friday, Pinnick and Dikko were at the offices of a Moroccan multinational company with extensive business interests in Nigeria, where an MOU was executed to explore the sponsorship of some activities in Nigerian Football including the NPFL. A steering group has been set up to ensure the conclusion and activation of the milestone MOU.

The agreements represent another landmark feat by the Amaju Pinnick –led Nigeria Football Federation, coming exactly one month after the N2.5 Billion, 5-Year partnership with Nigeria’s foremost energy solutions company, Aiteo Group for payment of salaries of Coaches of the National Teams.

The latest pact also sits comfortably with the ever –improving strong working relationship between the Governments of Nigeria and the Kingdom of Morocco.

Only last week, both Governments signed pacts to drive the implementation of gas regional pipeline and fertilizer initiative. The proposed Morocco-Nigeria Gas Regional Pipeline will have a direct impact on 300 million people through the speeding up of electrification projects in West Africa.