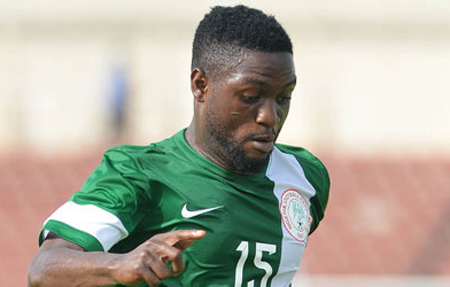 Though he is yet to be invited to the Super Eagles squad since Franco-German tactician Gernot Rohr took charge, Qatari Sporting Club striker Michael Babatunde was amazing in the just concluded season as he scored 25 goals along with 10 assists that ensured his side gained promotion from the Qatargas league to the elite division, Qatar Stars League.

The 24 -year old spoke to thenff.com on his performance in the just concluded season, the current Super Eagles under Coach Rohr, his aspiration and much more.

Q: How was the just concluded season for you?

Michael: Well, it was a fantastic season for me I must say. Initially moving to Qatar was a big decision I had to make and My family and I reasoned together and when we were convinced that the challenge and offer was good, I moved to Qatari SC. I scored a total of 25 goals for the club this season with 10 assists in the just concluded season which was good enough to qualify us from the QatarGas League to the elite division, the Qatar Stars League.

Q: A lot of people wondered why you chose to go to Qatar at a very young age despite having played for the Super Eagles at the FIFA World Cup in 2014?

Michael: After the World Cup in 2014, I had a deal to move from Dnipro in Ukraine to Morocco, and that was Raja Casablanca, which I did. I played just five months where I scored 12 goals with 15 assists and I won the award of the best player in the Moroccan league. A whole lot of offers especially from Eastern Europe surfaced but you know, the experience I had playing in Ukraine was not palatable at all and I didn’t want to go through that again. A situation where the club isn’t fulfilling their contractual agreements and where they owe players, i couldn’t have continued there just because I wanted to stay in Europe. So I moved to Raja and it was a good experience for me because I was able to add my quota to help the club from the 14th spot in the Moroccan league up to the 4th position before I left. The football in Qatar is highly competitive and being a rich country, the clubs competing in the league are very strong with very good players too in the league. I’m glad we have qualifed for the Qatari Stars League where we have top players like former Barcelona captain Xavi, Ivory Coast’s Yannick Sagbo, Mali’s and former Barcelona midfielder Seydou Keita and Imoh Ezekiel of Nigeria.

Michael: It is a fantastic set-up. The recent results of the team in the matches they’ve played shows it. The players are young and technically sound. I commend the Nigeria Football Federation for the appointment of Coach Rohr and I foresee better things to come for the Super Eagles.

Q: The last time you played for the Eagles was the friendly between Nigeria and Mali in France, do you still crave for a chance in this Eagles?

Michael: Well, my invitation to the national team is in the hands of the handlers. I really still crave for a chance in the Super Eagles especially among this young set up. I’m just 24 years old and at least have had some experience playing with the team in the past so I’ll jump at any chance to feature for my country again. I think I need to focus on my job and that is playing consistently and performing too. At least now I’m back in the elite league in Qatar, I hope I’ll be given a chance soon, I really do look forward to it.

Michael: We are Nigeria and from the record I know, South Africa have never defeated us in a competitive game so I believe that trend will continue when we play them in June. The last time we played, they stopped us from qualifying for the Africa Cup of Nations in 2015 and its time to take back our pound of flesh. The players we have are very good, i have no doubt that the team will perform very well. For the Indomitable Lions, they are currently the champions of Africa and we must have that at the back of our minds. But, I think the technical crew of Coach Gernot Rohr will see how they perform at the FIFA Confederation cup and with that have more knowledge of the team. I believe we have the players to beat Cameroon home and away. I’m not boasting but I believe the Super Eagles will qualify in style for the World Cup.

Q: Finally, the transfer window will soon be thrown open, do you have offers that may take you out of Qatar SC?

Michael: For now I have a running contract with Qatar SC and now that we have qualified to play in the Qatar Stars League its a good thing. So for now, I’m a player of Qatar SC. Yes, I already have 8 offers, four from the Chinese Super League, two from the German Bundesliga, and two from Turkey. Soon myself, my agent and Qatar SC will decide about my future.

Onyekuru’s lone goal wins it for Galatasaray against Göztepe SK