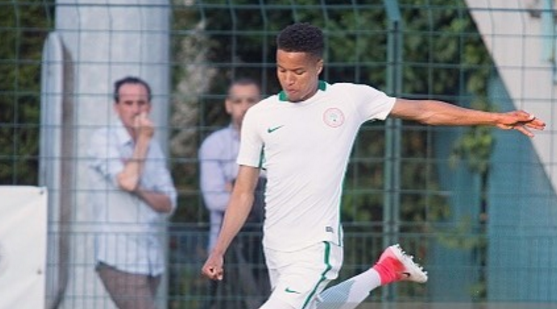 The Dutch-born Nigerian arrived exactly 5.30pm and was seen spotting a black T-shirt with ash pants. The 21-year-old initially turned down an earlier call-up by Super Eagles Coach Gernot Rohr but later reconsidered and joined the team when they camped in London for their friendlies against Senegal and the botched clash against Burkina Faso.
He subsequently honoured the call for the Corsica and Paris camping where he made his debut for the Nigerian team.

Ebuehi, who featured 29 times in all competitions for his modest Dutch side with one goal and an assist, will battle for a starting shirt against South Africa with Anorthosis Famagusta’s Abdullahi Shehu who started in that position in their 3-0 win over Togo’s Hawks in Paris.