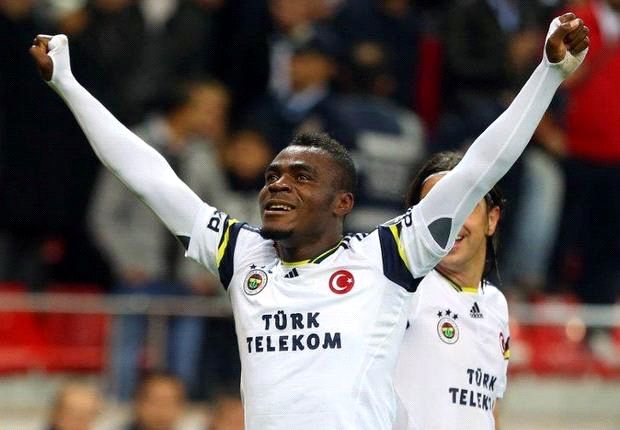 Former Super Eagles’ striker, Emmanuel Emenike ended his season on a good note after rifling home a 25-yard screamer to help Fenerbahce complete a 1-3 away win to Adanaspor on the last match day of the Turkish Super Lig campaign, AOIFootball.com reports.

Vladimir Koman opened scoring for the hosts inside 6 minutes, converting from the spot after a challenge on Emre Uruc saw him felled in the box.

Souza drew level for the visitors just 3 minutes later to leave the score at 1:1.

Aatif  Chahechouhe put Fernebahce upfront in the 22nd minute after his effort was deflected past the Adanaspor goalkeeper.

Emenike came in to replace Moussa Sow in a tactical substitution in the 74th minute of the encounter.

The former West Ham man saw his effort being blocked in the 83rd but found the back of the net in injury time to seal the victory for Fernebahce.

Fernebahce ended the season seating 3rd on the log after gathering 64 points from 34 matches and have booked a place in the Europa League while Adanaspor ended the campaign at the bottom of the table with 25 points and have been automatically relegated to the second tier division alongside Oboabona and Igiebor’s Rizespor.