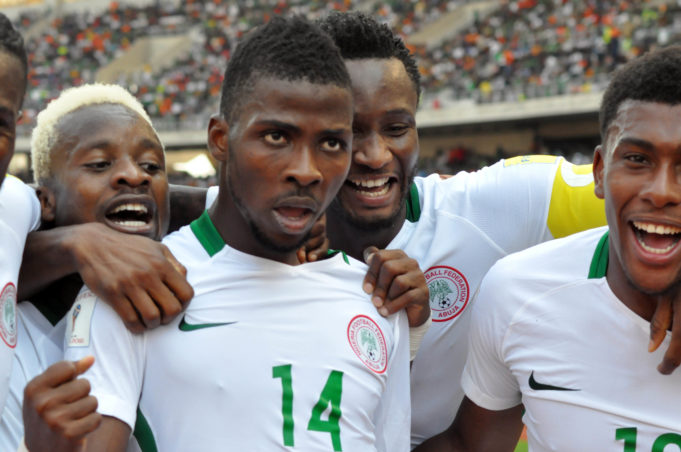 With many subplots and undertones, the Super Eagles host Bafana Bafana of South Africa in an AFCON qualifier in Uyo on Saturday.
The all-important game could help Gernot Rohr decide if he should stick with his young guns. By all means, the German Coach would hope he gets this one right as Saturday’s cracker could help the Nigerian fans get enamoured with the Coach.
About two and a half years ago, the grimace of the dejected players at the Godswill Akpabio Stadium stood inescapable as fans were disappointed when Nigeria missed out on the Africa Cup of Nations.

The Super Eagles could only eke out a 2-2 draw, courtesy Sone Aluko’s late brace when a victory would have sealed a spot for Nigeria at the 2015 AFCON. It was the beginning of the squalid slip out of continental reckoning as the Super Eagles plummeted farther with a second consecutive miss of Africa’s Premier tournament.

With Nigerians hoping we are not going to be third time unlucky, it is fitting that the Bafana Bafana are the first team the Super Eagles face on their road to AFCON redemption as the game in Uyo could set the tone for the rest of the AFCON qualifiers.
Coach Gernot Rohr, since he was appointed to tinker the Eagles, has picked up the squad and instilled some self-belief, working with the talents available and improving the quality of the squad selection. The victory against Zambia and, Algeria in particular, has won him the goodwill of football-loving Nigerians. The Super Eagles got results and played at a higher level in those World Cup qualifiers.
The German, in his squad selection for the game against South Africa, left out players based in China, preferring younger options, especially in the forward positions.
Ighalo and Ideye were the more conspicuous omissions with Ujah and Martins less likely to earn a call-up from. While Tianjin TEDA midfielder and Super Eagles’ Captain, John Obi Mikel, missed out due to an injury, he could still earn a call up, but the future of the others with the rebranded Super Eagles seem unlikely.
Asides Rohr’s excuse of the Chinese League being more difficult to track, there’s the issue of optimum talent application. It really is difficult for most players to apply themselves optimally, in less than challenging environments. Most of the new Chinese imports might not need to click their gears to full trot before they are deemed superior to both their teammates and opponents. There is therefore the possibility of physical and psychological laxity over time. It is nigh impossible to flip the switch from many matchdays of trudges and remissness in the CSL to supreme endeavour in the Green and White.

Then there’s the point of younger players being more malleable tactically, putting up less of a fuss when given certain instructions that might go against their grain.

Rohr sees the younger players as an opportunity to build a team in his image, a cohesive unit, sprightly, aggressive and technical.
There is talent bursting at the seams right now in the Super Eagles setup; it is an arduous task filling the four forward roles from Henry Onyekuru, Kelechi Iheanacho, Alex Iwobi, Ahmed Musa, Victor Osimhen and Kayode Olanrewaju from the game against the South Africans.
The showdown against the South Africans on Saturday will decide if Rohr sticks with his young guns or reverts to the more trusted legs in China. Will the fledglings soar or will they get their wings clipped? A spectacle awaits us.