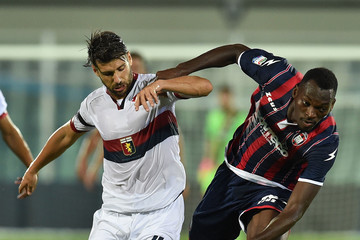 Following an impressive first season in the Italian Serie A, FC Crotone striker, Simeon Tochukwu Nwankwo is now an object of interest in France, Turkey and China, AOIFootball.com has gathered.

The tall and lanky Nwankwo had just four starts and came from the bench seventeen times for the Serie A side in his first season, scoring three important goals in all competitions.

However, reports abroad indicate newly signed coach of Nantes FC in the French Ligue 1, Claudio Ranieri has shown interest in the 25-year-old and wants him to lead the modest French side’s attack next season. Built in the similar frame of former Super Eagles’ captain Kanu Nwankwo, Simmy has an eye for goals and is an old-fashioned finisher who reverberates only in the 6 yard box, a player that can be termed a fox in the box.

The newly married former Gil Vicente of Portugal finisher is also commanding interests from clubs in Turkey, China and top clubs in the Serie A. He is however yet to decide where he would lace his boots next season.